You would think that a habitual roid rage abuser would be locked up after his first dozen offenses. Not so for this silver spoon kid who eventually killed a woman and claims, though covered in her blood, to be ‘not guilty’.[1] 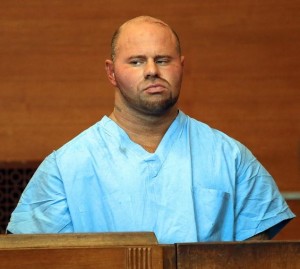 The son of famed Boston Red Sox broadcaster Jerry Remy accused of stabbing to death his ex-girlfriend had an unbelievably long history of violence against women that began when he was just 17.

The Boston Globe dug deep into Remy’s past and found nearly 20 years worth of glaring warning signs that the hulking admitted steroid abuser was capable of uncontrolled violence. But those warnings went unheeded. And, as the Globe writes, Remy became ‘the king of second chances.’

‘This is an old story for the American judicial system. You get a high-priced attorney, you get better justice,’ former Lowell, Massachusetts prosecutor Joshua Friedman, who once tried and failed to convince a judge to give Remy a real punishment.

Not only had he faced 18 criminal charges over the years by the time he entered his not guilty plea to ruthlessly stabbing 27-year-old Jennifer Martel, the mother of his daughter, but 10 of those times he walked free despite being on probation or having pending charges.

August 13, 2013 assault charge police filed on behalf of Jennifer Martel. She was dead two days later.
In court, prosecutors described a brutal and determined attack, saying Remy assaulted Martel in the kitchen, living room, on a stairway and then pinned her to the ground in the patio where he stabbed her several times. Neighbors who tried to help Martel were driven back when Remy slashed at them, Middlesex Assistant District Attorney Lisa McGovern told a judge.

Remy was arrested at the scene, his clothes soaked in the victim’s blood. Martel’s mother told The Boston Herald that her daughter had been ‘planning her escape’ when she was allegedly murdered by her long-time boyfriend.
‘She said, “I was planning my escape,”‘ Patty Martel, 53, said. ‘This was on Wednesday. She said, “Don’t worry, I’m planning my escape.”‘

Patty Martel said her daughter had returned to her apartment to get her belongings before fleeing. Jared Remy’s murder trial has been scheduled for October this year. He’s pleaded not guilty and thus far has maintained that he’s innocent of killing Martel.

Here’s an example of where the judicial system in Boston failed for over 2 decades. I don’t see any women’s rights activist groups clamoring to the courts to see this terrorizer of women behind bars. They’re too busy making sure women have the right to their own personal terrorism of killing babies. #FAIL