This story makes me wonder how much behind-the-scenes degeneracy exists in Hollywood–you know, in addition to the filth we already see splashed across the tabloids. Jurassic Park actor Cameron Thor is accused of kidnapping and raping a 13-year-old girl he met for acting classes.[1] 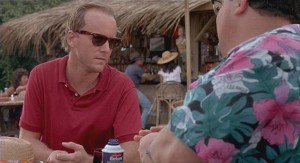 Thor’s assaults on the girl allegedly went on for a full year.

Officials said Thor was accused of sexually assaulting the girl between April 2008 and March 2009…Prosecutors filed charges including rape, sexual penetration, kidnap and robbery, according to the statement.

The statement said: ‘The victim consulted with suspect Thor about attending acting classes…After one of the consultations, suspect Thor drove her to a secluded area in Agoura Hills and sexually assaulted her. The victim was 13 years old at the time of the sexual assault.’

Vile. There are so many questions: Why is he being arrested now, 6 years after these assaults started? Where were the girl’s parents in all of this? And lastly, does Hollywood give a wink and a nod to this type of predatory behavior? This is, after all, the industry that still defends Roman Polanski, the guy who fled the country after he was caught drugging and raping a 13-year-old girl.