According to the Daily Mail[1], more than 400 teens were running wild at Kings Plaza Mall in Brooklyn, and that resulted in the mall banning kids from being in the mall without an adult:

A large group of teen girls reportedly fought each other over the incendiary t-shirt and the violent ‘knockout’ game also broke out on the mall’s top floor — where one teen may have been carrying a gun, cops told the New York Post.

The Daily Mail article has plenty of screen shots like this one: 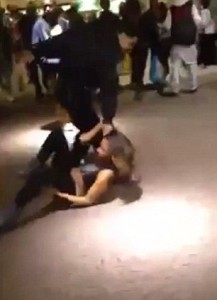 WABC-TV reports that the flash mob may have been started by a shirt one girl was wearing that included a picture and an ugly message about another girl. The girls reportedly responded to a message on Facebook to meet at the mall.