LA Times Columnist to Chick-fil-A: Shut Up and Fry! 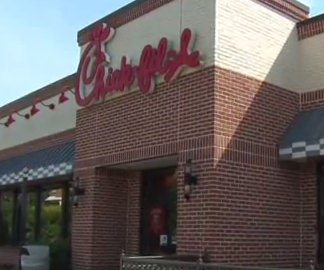 Today is Chick-fil-A Appreciation Day and freedom of speech never tasted so good. However, as millions of Americans lined up to grab one of their tasty chicken sandwiches and waffles fries, counter protests were also planned over Chick-fil-A President Dan Cathy’s , alleged anti-gay remarks, which were nothing more than an expression of his religiously-informed believe in traditional marriage.:  In a: confusing piece in the L.A. Times by Michale Hiltzik[2], he directly quoted what Cathy said:

We are very much supportive of the family – the biblical definition of the family unit, he told the Biblical Recorder. On the radio, he observed: I think we are inviting God’s judgment on our nation when we shake our fist at him and say we know better than you as to what constitutes a marriage.

But being pro-family is not anti-gay.:  Indeed, Chick-fil-A serves anyone who comes in the door and doesn’t discriminate against homosexuals for employment. But in the midst of all the left-wing clucking over Cathy’s remarks, Democratic Mayors Rahm Emanuel of Chicago and Thomas Menino of Boston hinted they’d block Chick-fil-A’s expansion in their cities just because they didn’t like Cathy’s politics.: : Other liberal Democratic mayors, like Ed Lee of San Francisco, have made similar rumblings.: [3]

Hiltzik turned to anti-Christian mockery of Cathy’s religious beliefs, snarking that “it might not be a terrible idea to try to learn a little more about why he thinks he has a direct line into God’s medulla oblongata before accepting his claim to be the Lord’s personal spokesman.”:  It’s comforting to see how the mainstream press can be so fair in their assessment of personal faith.

Hiltzik also suggested that CEOs of corporations should keep their mouths shut because they might be boycotted. :  He mentions Whole Foods founder John Mackey who:

in 2009…: wrote an op-ed attacking: President Obama‘s healthcare proposals. Mackey hinted that we could probably do away with the need for organized healthcare by eating from the right menu, such as that marketed by his stores. He argued that the nation’s founding documents didn’t reveal any intrinsic right to healthcare, food, or shelter” anyway, so quitcher bellyachin’. A boycott of Whole Foods was promptly launched. In 2010, similarly, it was revealed that: Target: had contributed $150,000 to a PAC backing a gubernatorial candidate opposing gay rights. A customer and shareholder backlash followed.

Despite these boycotts, both Whole Foods and Target are still getting along quite well and arguably saw upticks in business from political conservatives who were annoyed at the Left’s boycotts. However, Hiltzik doesn’t mention anywhere in his piece that “Google, Ebay, Microsoft, Starbucks, Electronic Arts (EA) and Zynga are among the 70 companies, professional organizations and municipalities opposed to the Defense of Marriage Act (DOMA)[4], which bans federal agencies from recognizing the legal marriages of gay and lesbian couples.” Furthermore, “the employers filed an: amicus brief[5]: urging the Ninth Circuit Court of Appeals to find portions of the act unconstitutional in: Golinski v. Office of Personnel Management.” : That is far more political than anything Dan Cathy has done.

Nevertheless, Hiltzik argued that Cathy has every right to say how he feels on political matters but he just can’t do it at work, which happens to be based on the values he was espousing in the interview.:  A privately-held company, Mr. Cathy can afford to not worry about the politically-correct tempests that keep publicly-traded companies like McDonald’s or Burger King from offending the PC police.

In an another act of liberal presumption, Hiltzik concluded his piece by complaining that

corporate executives surrounded by yes men telling them how wise they are will probably continue to try sharing their wisdom on subjects well outside their core competencies. Sometimes they’ll tailor their words to what they think are their target markets. Sometimes, like Cathy, they’ll discover that there are bigger markets out there where customers may not care for what they have to say. We should defend to the death their right to speak, and also our own right to make them pay for it, or not, at the cash register.

Perhaps on his lunch break today, Mr. Hiltzik had the chance to pass a Chick-fil-A that was lined up around the block with customers[6].