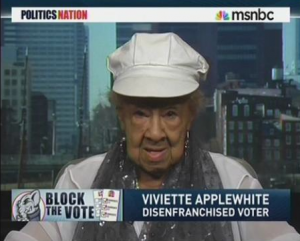 To service this narrative, Savage turned to elderly Philadelphia Democrat Viviette Applewhite, who cast “her first vote [was] for President Franklin D. Roosevelt.”*: : and is suing the Commonwealth over its new voter ID law.:  At no point in his story, however, did he mention Ms. Applewhite may be eligible to vote by absentee ballot.

“[T]he outcome of the lawsuit: could affect not just the voting rights of several hundred thousand Pennsylvanians but also who wins the presidential election,” Savage melodramatically insists. Applewhite’s “ record of faithfully voting for: Democrats: will be more difficult to maintain, thanks to a: strict voter identification: law adopted this year by Pennsylvania’s Republican-controlled Legislature,” he added.

Applewhite is among more than 186,000 registered voters who lack a valid driver’s license in this heavily Democratic city. Many of them are minorities. And to vote in Pennsylvania in November, they will need to produce a government-issued ID or driver’s license.: That could have national implications. Obama almost certainly needs to win in Pennsylvania to be reelected, and political analysts say the Democrat cannot win the state without piling up large margins in: Philadelphia: and Pittsburgh, the two cities where the new voter ID rule would hit the hardest.

Seeking to prove that voter ID is just a partisan conspiracy, : Savage quotes State House Majority Leader Mike Turzai saying: “Voter ID, which is going to: allow: Gov. Romney to win the state of Pennsylvania: Done,” to justify this claim. :  However, by not allowing non-citizens, dead people, and other forms of : tampering to persist, yes it allows Romney, or any candidate, to plausibly win the state untainted by voter fraud.

The most egregious part of the column is Mr. Savage’s claim that Applewhite has a raft of IDs, but none of them good enough for the state for voting purposes:

Applewhite… has a thick wad of identification cards, including from Medicare and her bank and a voter registration card. She has a city transit pass with her photo, but it is not deemed acceptable under the law. After many inquiries, she obtained a copy of her birth certificate through the mail.: But she was then told she had a problem because her name on the birth certificate did not match her married name on her other ID cards.

Of course, if Ms. Applewhite can’t get an ID by election day, she will not be turned away from the ballot box. From the Keystone State’s Department of State website[2]

NO ONE: legally entitled to vote will be denied the right to do so.:  If you do not have a photo ID, or are: indigent[3]: and unable to obtain one without payment of a fee, you may cast a: provisional ballot[4], and will have six days to provide your photo ID and/or an affirmation to your county elections office to have your ballot count.:  If you have a religious objection to being photographed you can still vote by presenting a valid without-photo driver’s license or a valid without-photo ID card issued by PennDOT.

What’s more, a quick visit to the Pennsylvania Department of State’s website shows that Ms. Applewhite may be eligible to cast a vote by absentee ballot,: : if she plans on being out of town for election day or if she is too ill to go to the polls.

Indeed, to vote absentee, a longtime voter like Applewhite need only provide the “last 4 digits of Social Security Number”: : to her local election board and “may provide [the] identifying number to [the] county over the phone, by email or mail.”

*Other sources on the Web, including the ACLU’s website, have Applewhite saying she first voted for John F. Kennedy[5]