Rodeo Clown Who Mocked Obama Ahead in Voting for PERSON OF THE YEAR!

Tuffy the Clown made national news when a liberal with a camera and limited experience at rodeos set his Outrage-o-Meter to “Head: Explode” at the Missouri State Fair Rodeo. Tuffy was manning the microphone when a skit featuring another clown wearing an Obama mask had to dodge a bull.

Liberals across America cried racism. Tuffy received death threats[1] over this faux outrage and was banned from the Missouri State Fair.

Now, he’s leading the polls for Sedalia’s Person of the Year:[2] 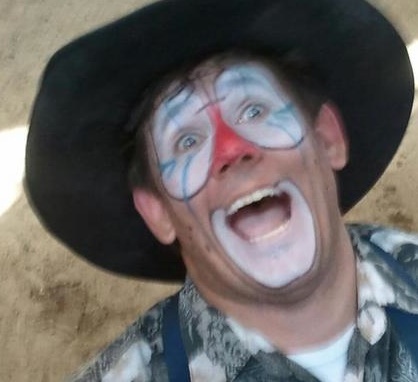 Tuffy gets the last laugh.

The Sedalia Person of the Year is the idea of KIX 105.7 disc jockey Rob Edwards. Edwards says Person of the Year titles are not necessarily about the nice guys, they belong to those who had the biggest impact and Tuffy fit the bill.

So far, Edwards has not spoken with Gessling but says he knows about the nomination because people have shared it with him on his Facebook page.

“I think that’s another reason why he’s doing so well, he actually has a lot of fans, believe it or not,” Edwards says. “I’ve met him a few times, he seems like a cool guy.”

Here’s Tuffy’s Facebook page[4], plastered with people congratulating him and encouraging others to vote for him.

Speaking of which, you can vote here[5].

Cross posted from The Missouri Torch[6], where you can find Missouri’s hottest political news.