People have grown too fearful of the media and are cowering in fear that someone will find out what they believe. Sports Anchor, Craig James was fired for his belief that marriage should be between a man and a woman. He is now suing FOX under religious employment discrimination.[1] 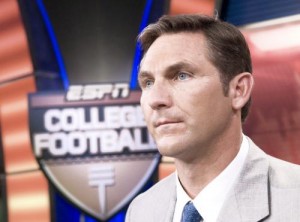 Officials for Fox Sports, whose vice president earlier said one-time football analyst Craig James was fired for his beliefs about and support for traditional marriage, now say those statements were false, according to a complaint filed with the Texas Workforce Commission. The complaint was filed on behalf of James by officials with Liberty Institute, which is representing James. According to the legal team, it was a national spokesperson for Fox Sports who told the Dallas Morning News “that James was terminated because of his religious beliefs about same-sex marriage.”
But now, “during a sworn deposition,” Fox Sports President Eric Shanks “stated that the Senior Vice-President for Communications and spokesperson for Fox Sports Lou D’Ermilio made false statements to the press.”

The organization also said Shanks said he did not know why D’Ermilio made the “false statements,” and there has been no investigation to determine why the statements were made. The online copy of the complaint details what is alleged against Fox Sports: that officials rid themselves of James over his religious beliefs.

“Fox Sports’ firing of Craig James because of his sincerely held religious beliefs concerning marriage, beliefs held by millions of Americans, constitutes religious discrimination that violates the law,” said Jeff Mateer, general counsel for the Institute. “In order to avoid that claim, Fox executives now contend what their national spokesperson said to the media at the time of the firing was false.

“Someone’s not telling the truth. This action will get to the bottom of those contentions. Regardless, Fox Sports is responsible,” he said.
James accuses Fox Sports of religious employment discrimination based in part on Fox’s report to the media that he was terminated for comments made about his support for the biblical view of marriage while running for the U.S. Senate in 2012

When Americans are afraid to say what they think or are government penalizing them for what their beliefs, we can no longer be America.
Also,
Waitress Who Claimed Family Left Her Nasty Note & Didn’t Tip Her Because She’s Gay Was Lying[3]