Don’t be deceived by the hysterical claims by progressive commentators and LBGT activists that asserts Arizona’s new bill allowing business owners the right to refuse service based upon their religious beliefs discriminates against Gays.: 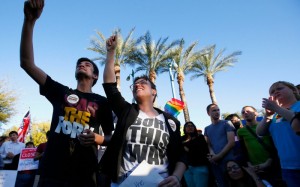 What LBGTs are truly upset about is that they are mow prevented from filing confrontational and publicity seeking lawsuits against business they target for harassment.:  There is no shortage of businesses run by progressives in Arizona and most other states that would gladly cater to the LBGT community.:  But what they do is purposely target shops and other establishments knowing all along the religious beliefs of the owner hoping to get a confrontation so they could quickly call their lawyers.:

People of faith under the first amendment of the Constitution are entitled to practice their religious beliefs and that extends to their businesses.:

What LBGTs want is universal acceptance of their lifestyle!:  And they have no qualms using the court system to have it forced upon everyone.:  That’s what Arizona’s religious freedom law was designed to stop.: : : :