The new era of political correctness has arrived. Persecution for telling the truth can now be as severe as getting fired for giving your honest opinion when asked for it like what happened to Aids expert Brendan Bain.[1] 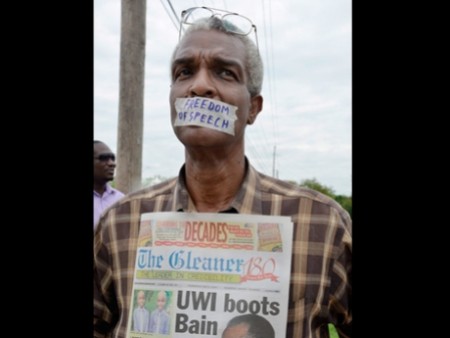 Protests are growing in Jamaica after the sacking of a leading Caribbean authority on HIV/AIDS because he testified as an expert witness on behalf of religious groups against an anti-sodomy law in Belize.

The expert is Brendan Bain, a doctor who had been employed by the Jamaica campus of the University of the West Indies — a public school — before he was canned last week.

Bain’s controversial expert opinion was that “the relative risk of contracting HIV is significantly higher among men who have sex with other men in Belize than in the general population,” according to Legal Insurrection’s William Jacobsen.

Protesters, who hit the University of the West Indies campus near Kingston on Monday, say school administrators fired Bain because he expressed his professional opinion.

“This is a free speech issue and it’s a truth issue,” said Doreen Brady-West, an oncologist on the school’s faculty of medical sciences, according to ABC News.

The university said it terminated Bain’s contract because many authorities felt his testimony (based on actual data that is accepted by, well, everyone) contributed “to the continued criminalization and stigmatization” of gay sex. Ummmmmm that’s a head scratcher.

Also,
British Church Ordered by Police to Take Down “Fires of Hell” Poster — It Was Offensive[3]