Nick Searcy is a conservative. : I have nothing to fear from his wrath. : Yet I’m scared of him, and I’m not afraid of nothing. : Sean Penn never knew what hit him:[1] 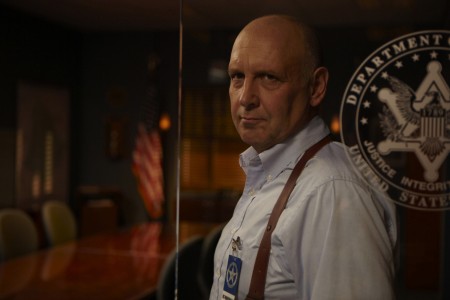 “It’s a long story,” Searcy began, letting out a sigh as he figured out where to start.

Searcy said the wheels were set in motion by a separate email exchange he had with a conservative actress, whom he chose not to identify. The actress was apparently working on a “piece on conservatives in Hollywood” so she asked Searcy what it was like to work with Penn. The actor said he was under the assumption their conversation about Penn would be off the record.

He said he told the unnamed actress in an email that he enjoyed working with Penn on set, though the two certainly disagree strongly about politics.

“I generally don’t do politics on a movie set – that’s not what we are there for,” he told TheBlaze. “We are there to do a job.”

Shortly after their conversation, Searcy said the actress told him she was “fed up with the bullies in Hollywood” and took it upon herself to send his email to “several people,” including Sean Penn.

“I told her, ‘You didn’t have any right to do that,’” Searcy recalled. “I figured there wasn’t any problem though because I didn’t say anything I didn’t believe.”

Then he got a personal reply from Penn, who apparently asked Searcy why he would even agree to work on a movie with him if he knew what his politics were. Searcy also remembered Penn telling him he didn’t care about his “respect” for him as an actor.

In his emailed response, Searcy said he told Penn he doesn’t turn down roles based on people’s politics because if he only worked with Republicans in Hollywood, he “wouldn’t work much at all.”

“He then wrote back with something even nastier,” Searcy continued, “so I finally ended up saying, ‘Congratulations on your Oscar – now do me a favor and shine it up real nice and stick it up your ass so you can see it when you wake up in the morning, because that’s where your head is.’”

He also told Penn at the time he wasn’t in a position to turn down offers based on politics because he didn’t have the luxury of “making $5 million every time I changed my mustache” for a new role.

The story demonstrates how “intolerant” some on the left can be when it comes to different points of view, Searcy said.

There is no group more intolerant than the left.

Oh, they’ll say they preach tolerance, but it’s all a ruse. : They don’t want diversity.

If you aren’t all the same drones, toeing the progressive line, you’re no one to them.

Sean Penn and his ilk are proof of that.

See also: : When Obama’s Bullcrap Goes Airborne — His Regulations Stink As Much As What He Is Regulating