Gay culture is known for it’s high rate of narcissistic people so it hardly surprises me that another fake hate-crime has been revealed. It is getting old to find out that another lesbian has admitted her anti-gay “hate crime” was a farce.[1] 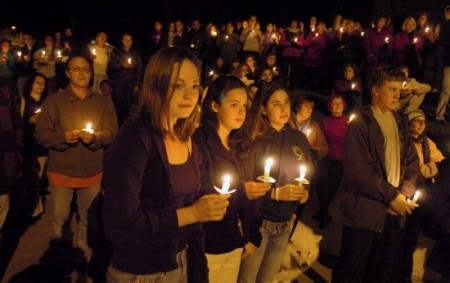 Above is a pic of the candlelight vigil held to protest the “hate crime.”

SAN FRANCISCO, CA, May 6, 2014 — A woman who claimed to be the victim of an anti-gay “hate crime” in 2004 has admitted she faked the incident because she had not done her homework.

Mary (no last name was given in the interview), who in 2004 caused a tumult in her California town when bigoted remarks appeared on her locker, told Buzzfeed’s Sandra Allen that she faked it all because “I hadn’t done” homework assigned at least a week earlier. “None of it. Hadn’t read anything, hadn’t done the notes. I don’t remember what the assignment was, but it was something that we had a week or two to do and I hadn’t done any of it.”

“So I broke into the locker room and I graffitied my locker,” she said.

According to Mary, “The first or second period of the day, they called me out of the office. They said, ‘You can go home if you want to.’ I was like, Sweet. I went home and did my homework.”

Things progressed. At one point, Mary claimed she had been hit with an egg in the face. Two local boys were arrested at gunpoint as possible suspects, and a vigil with at least 250 people was held to stand with her.

Yet the crimes kept happening throughout the school year, and threatening phone calls began to be made to several homosexual teachers.

Mary said she targeted the teachers in an attempt to force them out of the closet.

Eventually, Mary admitted she had committed all of the crimes. Mary, who described her actions as “totally selfish,” says some of her actions were stress-induced, including the divorce of her parents, her sister leaving for college, issues with teachers, and normal teenage uncertainty.

The gay community really needs to teach how crying wolf is going to destroy it for real victims… but of course the gay lobby doesn’t care because since there’s not enough real hate crimes out there, fake hate crimes still help to push forward their agenda.

Also,
Fake Hate Crime Caught on Tape by Police: British Teen Not Attacked for Being Gay, He Was Drunk and Tripped[3]