Sometimes I feel bad for women…. the weakened sex. The masculinization of women have actually made them weaker and stripped them of real power. Consider the famous quote published in 1865; “The Hand That Rocks The Cradle Is The Hand That Rules The World”, a poem by William Ross Wallace that praises motherhood as the preeminent force for change in the world. Feminists groups have banded together with organizations like the Girlscouts and Lean-In to encourage women to pursue ambitions they deem respectable while discouraging some of the most important and powerful roles of a woman and the titles that come with it. Mothers have been known for centuries for their ability to raise their children through using a very important technique called “bossiness”. According to Bureau of Labor Statistics by Catalyst Research in 2013, the number of Women in U.S. Management, Professional and Related Positions is 51.5% which is proof that their maternal bossiness has given them a boost in managerial status. Now liberal feminists whose feelings are hurt by the stereotype of being “bossy” have set up a website to ban the attribute; “bossy”.[1] 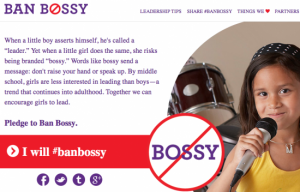 Led by Obama bundler and Facebook COO: Sheryl Sandberg. They even have their own “Ban Bossy” website[3], and it apparently is not a joke.

Sandberg – the chief operating officer of Facebook and author of the best-selling book “Lean In” – is spearheading the launch of a campaign today to ban the word “bossy,” arguing the negative put-down stops girls from pursuing leadership roles.

Sandberg said these attitudes begin early and continue into adulthood.

“We call girls bossy on the playground,” Sandberg said. “We call them too aggressive or other B-words in the workplace. They’re bossy as little girls, and then they’re aggressive, political, shrill, too ambitious as women.”

Chavez said she got involved immediately after receiving a call from Sandberg, and believes the Girl Scouts are ideal partners for the new initiative. More than half of all American women were once Girl Scouts and two million girls are currently in scouting, she pointed out.

“Imagine a classroom in America where 50 kids are present: 25 girls, 25 boys,” Chavez said.

“And the teacher walks into this classroom and says: ‘Boys and girls, I have this really hard, difficult program that I need to solve that’s gonna impact this country.’ She writes the problem on the board and then turns around and escorts 24 of the 25 girls out of the room. … She leaves one girl and 25 boys to solve that equation. That’s what’s happening every day in this country. Why wouldn’t we want more girls to be opting in to building the right solutions this country.”

The goal of the “Ban Bossy” campaign is to help girls and women feel more confident and comfortable as leaders.

“I was called bossy when I was in ninth grade,” Sandberg recalled. “My teacher took my best friend Mindy aside and she said, ‘You shouldn’t be friends with Sheryl. She’s bossy.’ And that hurt.”

Setting up an entire website to ban a word, a harmless descriptive word, is something a man wouldn’t do. Why? Because they don’t want to appear weak. Do you really think they don’t get labeled by their bosses or co-workers? They suck it up, figure out a way around it or through it and turn the lemons into lemonade. That is something mothers use to teach their children when they were being bullied at school… suck it up and figure a way to get out of it. I know feminists dream of an Amazonian woman-ruled world but with stupid you’re-a-victim ideas like this… they will never achieve it and continue to make themselves look like the weaker sex. What an embarrassment.