There are very few things that liberals and conservatives agree on, but one of them is that racial slurs are extraordinarily offensive[1].

A Minnesota-based publishing house has dropped one of its authors for calling a black conservative woman an “Aunt Tom” and “ignorant c—t” on Twitter.

Author Scott Colbert has since deleted the Friday tweet to Crystal Wright, known as “@GOPBlackChick,” and locked his Twitter feed, but not before conservative commentator and bestselling author Brad Thor highlighted it on his own Twitter account. Thor, a frequent Glenn Beck television and radio guest, replied to Colbert: “Did you just hurl a racial slur at my friend?” 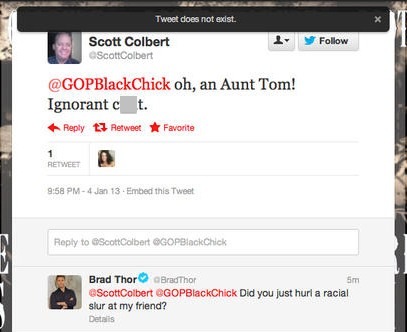 Thor then proceeded to tweet Colbert’s publisher, KHP Publishers, Inc., and many of Colbert’s followers a screenshot of his epithet.

By Saturday, KHP had posted a message on its website announcing it had terminated its contract with an author, whom it did not name, due to an “inexcusable” incident.

“[T]he author made a racial slur at the person with KHP material plastering his Twitter page’s background. This involved the company, and we saw the results of this on our own Twitter page this morning,” KHP wrote. “[W]e find this inexcusable. In sticking to our own ‘zero tolerance’ model, we terminated our contract with this author immediately and his book is in the process of being removed from stores.”

The publisher noted that the decision was “not just a business issue” but a personal one as well – the company’s CEO is white and married to a black woman: “They have two beautiful children and have dealt with racism often in their lives. It simply will not be tolerated by any of us here at KHP.”

Racial slurs like Uncle Tom, Aunt Jemima, oreo & n*gger are incredibly offensive. Nobody should be hurling that kind of language at his political adversaries, including liberals.