Having lived there and several other states, I have to say that Texas is home to some of the rudest, most knowingly reckless drivers I’ve ever encountered. (I can’t count the number of times I’ve been tailgated at 85 miles per hour by some jerk in a giant truck as he yaks on his phone.) But this story goes beyond that. An Arlington woman ran a red light and plowed into a stroller, killing a 7-month-old baby. [1] 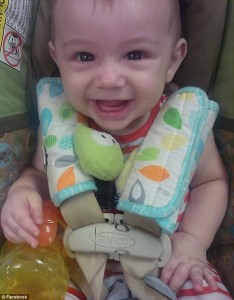 The boy’s father screamed out “Look at what you’ve done!”

A seven-month-old baby has been killed in Texas after a driver allegedly ran a red light and crushed the stroller being pushed across the road by the boy’s father…Witnesses say that seconds after the crash, which occurred:  at a busy intersection in Arlington, the father, Daniel Bingenheimer, picked up his tiny son, David, and screamed out in pain.

A white sedan being driven by a woman is said to have ran the light and collided with a red pickup truck, which then careened into the stroller…’It was the dad carrying his baby over to (the woman in the sedan) yelling, ”Look at what you’ve done”,’ said Dr. Jerrod Edwards, whose office is nearby and attended the scene.

Horrible. Who wants to bet a cell phone, combined with a “screw you other drivers, I have places to be” attitude, was involved?
Also see: An Interview With Andrew Breitbart[3]
Endnotes: