Look to the Future, Comrades!

The Statist can never look at history, or at human experience, or their own record of failure. Thus, the Statist must paint a Utopian vision of the future.

Delivered on March 1, 1920 at the First All-Russia Congress of Workers, Vladimir Lenin[1] concluded his keynote speech with the following promise. 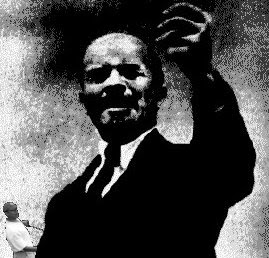 We have now concentrated all our forces on the restoration of industry and are steadfastly waging this new war, in which we shall be as victorious as we have been hitherto. We have instructed a commission of scientists and engineers to draw up a plan for the electrification of Russia. The plan will be ready in two months and will enable us to got a full and clear picture of how, in a few years, the whole of Russia will be covered by a network of electric transmission lines, will be restored in a new way, not the old way, and how she will achieve that culture which [we] saw in Germany.

That is the way we must restore our industry, and that is the way we shall return a hundredfold the loan of grain we are taking from the peasants. We know that this cannot be done in a year or two; the minimum programme of electrification is calculated for a period of not less than three years, and the complete success of this advanced industry will require not less than ten years … We have gained that experience in leading the masses with the help of urban workers which will carry us through all difficulties on this bloodless front of struggle against economic chaos and will lead to greater victories than those we gained in the war against international imperialism. (Applause.)

71 years later, when the Soviet Union collapsed, huge swaths of the country had no electric power.

In a speech delivered on January 8, 2009, President-Elect Barack Obama urged Congress to pass a Stimulus bill warning that the recession could become “dramatically worse” and last for years otherwise[2].

That is why we need to act boldly and act now to reverse these cycles. That’s why we need to put money in the pockets of the American people, create new jobs, and invest in our future…

That work begins with this plan — a plan I am confident will save or create at least three million jobs over the next few years… That’s why we’ll invest in priorities like energy and education; health care and a new infrastructure that are necessary to keep us strong and competitive in the 21st century. That’s why the overwhelming majority of the jobs created will be in the private sector, while our plan will save the public sector jobs…

To finally spark the creation of a clean energy economy, we will double the production of alternative energy in the next three years. We will modernize more than 75% of federal buildings and improve the energy efficiency of two million American homes, saving consumers and taxpayers billions on our energy bills. In the process, we will put Americans to work in new jobs that pay well and can’t be outsourced — jobs building solar panels and wind turbines; constructing fuel-efficient cars and buildings; and developing the new energy technologies that will lead to even more jobs, more savings, and a cleaner, safer planet in the bargain.

To improve the quality of our health care while lowering its cost, we will make the immediate investments necessary to ensure that within five years, all of America’s medical records are computerized

This is the hallmark of the Statist.

Ideologically unable to unleash the private sector, the Statist must always paint a picture of a Utopian future hovering just a few years away. If only you can give him more more money and more authority, this Utopia can be yours!

And, of course, it always fails to materialize.

We must deconstruct the Statists’ policy failures. Look not at the mirage-like vision of the future that he paints; look instead at what he’s done.


Related: Four Brutal Graphs From the Age of Obama[3].