Loud mouthed Democrat State Rep Offers $100,000 to anyone who can show a ‘Whole Bunch of Whites’ Have Adopted Black Kids & It Backfires

How is it that Democrats can get away with belching out racially offensive comments and stay in office? Last month, Alabama state representative Alvin Holmes said he’d give $100,000 to anyone who could prove “a bunch of whites” had adopted black children in the state. Now, he might have to pay up. [1] 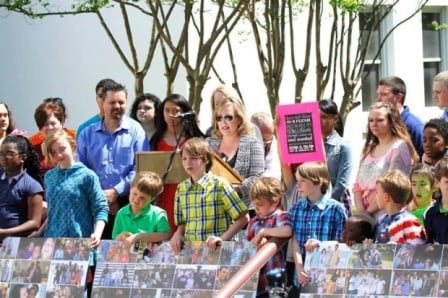 On Wednesday, a group called Faces of Families gathered on the steps of the Alabama state house to protest Holmes’ remarks.

After the group showed up, Holmes doubled down on his comments, telling a local television station,: ”The majority of the white people in the state of Alabama are against adopting black children.”: The group has asked for an apology from Holmes and some are calling for his resignation…It would appear that Faces of Families in Alabama met his challenge. One adoptive mom, Beverly Owings, who has a 13-year-old bi-racial daughter told the local ABC affiliate, “he should have to put his money where his mouth is.”

What a bigot. Even when confronted with living, breathing evidence to the contrary, Holmes stood by the old “pro-lifers don’t care about black babies” cliche. (He also claimed that Republicans would support abortion if their daughters were impregnated by black men, which, while still utterly stupid, is at least somewhat original.)

If this guy were white, he’d be packing up his office already.