He also told the teens their behavior was “unacceptable.” : They were attacking people. They were robbing people. “Unacceptable” might be a little bit of an understatement:[1]

According to the latest reports from police, at least 17 incidents were reported after a group of approximately 200 teens began robbing and assaulting people Saturday night.

Police say it started around 7:45 p.m. when the teens gathered near the entrance of the Big Four Bridge.

That’s where police say 12 teens assaulted and robbed a 13-year-old girl, as well as a man who came and tried to help her.

Officers broke up the crowd, but shortly after that, there were more problems in the downtown area.

Police say once the large group left Waterfront Park, 70-80 teens were reported to be causing a scene at the White Castle on 1st Street. Nearby, a woman reported a group of teens assaulted her while she was parked in her car. Police say her two children were in the car with her, as the suspects repeatedly punched her and threw trash cans at the car.

A group then raided Bader’s Market on South 1st Street. Police say they took items off the shelves and assaulted the clerk as he tried to close the doors on them.

On Monday, Louisville Mayor Greg Fischer addressed the problem, telling the teens their behavior was unacceptable. 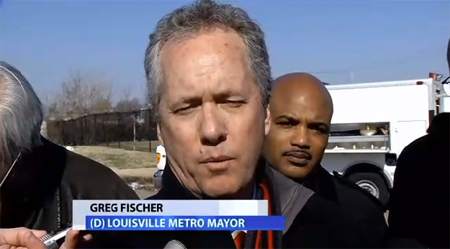 “To the young kids, y’all know what you did was wrong. You weren’t raised this way. It’s not the way we roll in the city. We expect greatness from our youth. We don’t expect violence from our youth. So we’re calling on you, obviously, to get your act together.”

Yep. That ought to fix it.