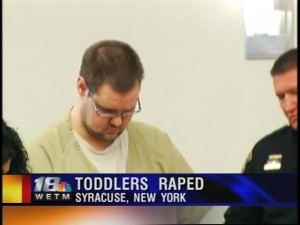 SYRACUSE — With his head down, not looking up to make eye contact with anyone, a Syracuse man learned his punishment for raping a two-year-old and a four-year-old in 2010.

“I’m going to impose a sentence that will put you in jail for close to 30 years… but you have sentenced these two children to a life sentence. They will have to live with the effect of your conduct for the rest of their lives,”: Judge Anthony Aloi told 33-year-old Ronald Clark in Onondaga County Court Thursday morning.

Clark will spend the next 27 to 29 years in prison, the maximum sentence. He was sentenced to 25 years for two-counts of rape, and will serve a consecutive sentence of two to four years for possessing child pornography, which investigators found on his computer.

Last December, Clark admitted to raping the two toddlers as his wife, Sierra Clark, held them down. This happened sometime between April and the end of August in 2013.: Assistant District Attorney Jeff Schiano says the case against Sierra will go to court soon. For now, she sits in jail on rape and sex abuse charges. In court Thursday, Schiano said he’s never seen a case so disgusting and disturbing as the case of Ronald Clark.

“I’m convinced he is less than a human being. His acts are absolutely unbelievable to me and they are unforgivable. The rape of a two and four-year-old while another person holds those children down is absolutely unforgivable,” Schiano said. That’s a sentiment Judge Aloi agrees with.

“I’ve been involved with the criminal justice system for a number of years, and this is truly one of the most vile and disgusting cases that has come across my desk that I can ever remember,” Aloi said before reading the sentence. “The only word that I can use to describe the acts, are that they are ‘vile’. I don’t know if ‘vile’ even comes close to what it really is.”

In a statement to the court, Schiano briefly acknowledged an apology Clark sent to the District Attorney’s Office to the victims.

“I received your apology for your cold, monstrous acts. On behalf of the people of the State of New York and on behalf of the victims of this case, your apology is not accepted. You should never ever be allowed to breathe the same air as those two innocent children breathe.”

In an interview with CNY Central, Schiano would not comment on the content of the letter, but he says the young victims – now about five and seven years old – are “doing great.”

“I can tell you, those two little girls, while he could steal their innocence, he couldn’t touch their spirits,” Schiano said.

Schiano hopes this case will spotlight the seriousness of child pornography, saying it is: a: warning sign, sometimes: indicative of a bigger issue.

“Possession of child pornography isn’t always just possessing child pornography, people will actually act on these things. We’ve seen it twice in a couple of years,” he says. “The bigger issue for me as a prosecutor, when we walk into the courtroom and you know, there’s this mentality that sometimes in some courts, ‘They’re just possessing it, they’re just looking at it.'”

“Well, Ronald Clark wasn’t just looking at it. Ronald Clark acted on it. And we’ve seen other people do the same.”

Ronald Clark should be castrated and put into general population in prison with the tattoo “toddler rapist” across his arms. While the disgusting excuse for a mother, we’ll call her a birth canal donor, should receive a full hysterectomy and be locked up alone in a dark room with the sounds of babies crying and babies screaming looping day after day. The two of them will be getting off easily in a comfy cell with daily food, exercise and access to TV’s and books at their leisure. Thanks prison system for rewarding the deepest evil with distractions.