Man Lost Health Plan Due To ObamaCare, Has Over $100K In Hospital Bills

Almost 5 million people were dropped by their health insurance companies last year because of the implementation of Obamacare. Many others lost their health insurance because their employers had to drop them which only increases that number. Lenny Hubbs was dropped from his wife’s policy just before a medical emergency and now owes a fortune that might bankrupt the family.[1] 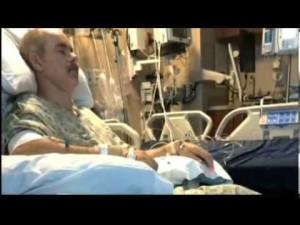 After Losing Health Plan Due To ObamaCare, Oklahoma Man Has Over $100K In Hospital Bills—

An Oklahoma man is facing over $100,000 in hospital bills because he lost his health insurance plan due to Obamacare.

Lenny Hubbs, a “healthy man,” as his wife describes him, is a self-employed contractor who was previously on his wife’s health insurance plan. Her employer announced that his employees would no longer be allowed to pay for their spouses’ premiums.

They could not afford to purchase health insurance. Lenny’s wife told KXII-TX that “good” health insurance would have cost them $500 a month. They do not qualify for Medicaid.

Hubbs became sick about two weeks ago. Doctors told him his lungs were filling with blood and diagnosed him with Pneumonia.

He visited two hospitals to seek treatment. The Hubbs allege that he did not receive proper treatment at either hospital because they were uninsured. He had to have part of his lung removed and now are stuck with upwards of $100,000 in hospital bills

This man’s story while tragic is not surprising since just 5 years ago many of us sat in townhalls with our Representative begging them to vote “NO” on the Affordable Care Act. Looking at most everything the government touches from the USPS to the car industry in Detroit the results were predictable. But I guess people can go right on believing that having government “fix” medical care in the US was a good idea.

Also,
Obamacare Nightmare — ‘Thanks to Obamacare I Will Not Have Insurance in March’