When should a women get a ‘Mother of the Year Award’? I’m not a perfect judge of that but this mom, Melissa Delp, has the worst judgement as a mother I have ever seen. She left her kids with a mentally unstable tattoo artist, then allowed her boyfriend near the kids with HOT RAZORS?[1] 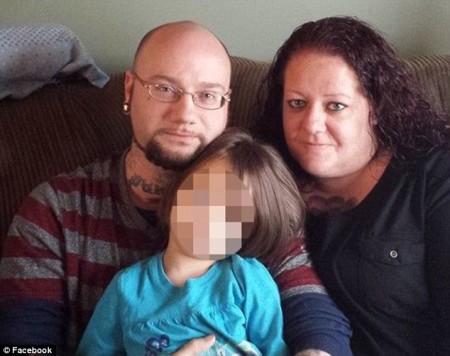 Alexander Edwards, 20, of Rustburg, was taking care of his family friend Melissa Delp’s two daughters on December 22, 2013, while she and her boyfriend, Daniel Janney, were out.

According to ABC News, he used a home kit to tattoo the pair, who were both under the age of 13.

One of the girls reportedly had her name tattooed on her shoulder. It’s not clear her sister got inked or what that tattoo was.

When Delp, 35, and her boyfriend, Janney, 32, returned home to find out what had happened, they attempted to remove the tattoos, Major L.T. Guthrie of the Campbell County Sheriff’s Office said.

ABC reported that Janney tried to use a hot razor blade to remove the ink.

They too are now facing charges.

‘It didn’t help the situation any,’ Guthrie said of the parents’ attempt to hide the inkings.

The couple is charged with two counts each of malicious wounding and child neglect.

Forget about leaving these kids with a loony tattoo artist… I question anyone leaving their children with this mother. Ugh… God save America from themselves!