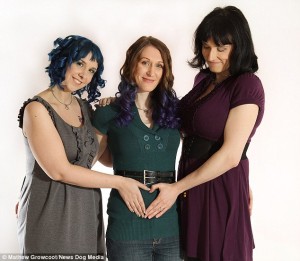 How is that even possible?

Doll, Kitten and Brynn, from Massachusetts, were joined together in a marriage-style ceremony last August and are expecting a daughter in July.

Kitten, 27, is pregnant after undergoing IVF treatment using an anonymous sperm donor, and the trio eventually plan to have three children – one for each of them.

I refuse to pretend. Shame on these disgusting people, and shame on the state of Massachusetts for sanctioning this freak show.