A Texas man, David Strickland, allegedly sexually assaulted and shot two teenage lesbians[1], Mollie Olgin, 19, and Mary Kristene Chapa, 18, in a park with the help of his wife. Olgin died at the scene, and Chapa survived with a brain injury. 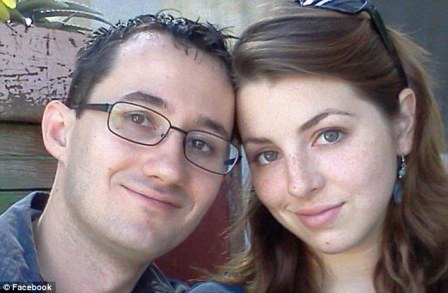 The girls were discovered in the park the next day.

Strickland faces capital murder, aggravated sexual assault and aggravated assault with a weapon charges, the agency said…Also arrested on Friday was his wife Laura Strickland, 23, Portland police said in a release published to their Facebook page. She allegedly tampered with evidence.

‘We are confident that we have the person responsible for this horrific crime in custody,’ Portland police said. ‘There is still a lot to do in order to prepare the case for prosecution. The families involved will never be the same, but it is our hope that the Olgin and Chapa families will at least feel some form of closure on this chapter of life.’

There’s no word yet on motive or whether the teens’ sexual orientation had anything to do with it. But either way, I say forget “hate crime” charges. Give him the death penalty.