What do you call it when you give a guy money and he turns around and says he’s going to crush you? Rumor has it that Senator Mitch McConnell had connived some donation money out of tea parties and now he’s turned around and punches them in the face. Mitch says that he will crush the tea party and make sure they don’t have a single nominee anywhere in the country.[1] 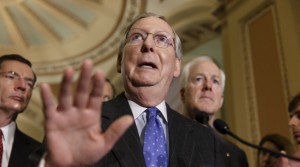 Senate Minority Leader Mitch McConnell (R-KY) believes that incumbent Republicans won’t have a problem holding their seats in the 2014 elections.

“I think we are going to crush them everywhere,” McConnell said about Tea Party challengers in a New York Times interview published Saturday. “I don’t think they are going to have a single nominee anywhere in the country.”

McConnell faces a primary challenge from the right. The Senate Conservatives Fund, which backs Tea Party challenger Matt Bevin, believes the candidate has a chance of defeating McConnell the the primary.

“Mitch McConnell is clearly in trouble in this primary or he wouldn’t be attacking Matt Bevin and declaring war on conservatives,” Matt Hoskins, the head of the SCF, told the New York Times.

I was not going to get involved in KY but I’m now feeling a hankering to attach myself irritatingly to McConnell. If you tend to be negative, please open up your can of negative on McConnell and make annoying him your new hobby. If you are a positive person; do one thing every day to promote McConnell’s opponent, TEA PARTY candidate, Matt Bevin.

HHS Needs $1.8 Billion To Run Obamacare Website For One Year…[3]