So the producer and co-creator of The Daily Show[1], Lizz Winstead, made a bad joke[2] about the Oklahoma Tornado hitting a red state. “This tornado is in Oklahoma so clearly it has been ordered to only target conservatives.” Then she apologized[3] and backpedaled like crazy in the best self-deprecating manner should could rustle up[4], once she found out that real people were getting hurt and killed. 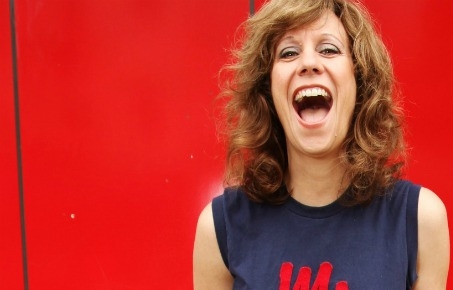 There’s a great case to be made[6] that this isn’t sufficient to let her “off the hook.”

I tend to over-think these things. Maybe this is one of those times I shouldn’t be doing that. Winstead made a “funny” joke before she figured out people were going to be hurt, so it was outside of her intention to wish ill on anyone, or to make light of it once the worst came to pass. She owned up. Let’s move on. Right?

Um…not so fast there. This Daily Show producer being a dark-hearted evil monster who laughs at dead children, is not the focus of my concern and it never has been the focus of my concern. When someone says something stupid like that, it isn’t even my default presumption about what’s going on. I’m more worried about just the thoughtlessness of it. I’m not worried about whether her horizons were broadened once she realized she made an ass out of herself — although maybe I should be, since in her Twitter feed, post-backpedal-moment, I don’t see anything along the lines of “I learned something.” I’m upset that she had to have them broadened in the first place. She didn’t see Oklahoma citizens as “real” people or something? I mean, that was the whole point of her little quip, wasn’t it?

In fact, I think my own horizons are the ones that just got embiggened here. Let me explain that: I’ve often made the point that it isn’t safe to generalize among liberals too broadly. They all push bad policies, but the “elite apathetic” types push the bad policies because they don’t care that the policies hurt people, while the “common ignorants” presumably have the very best intentions and want the best for their fellow world-citizens; they just don’t understand how awful and wretched the policies are. And so, I’ve rationalized, the liberalism we see is simply a sales transaction, from the few cynical psychopaths to the many low-information voters.

It’s a good rationalization. It’s a friendly rationalization, since it makes it possible for all of us to start to find ways to get along. And there’s truth to it, which indicates there’s a need for it: I do know some liberals who are good people. They’re misguided, of course, and by seeing things this way I can at least try to find ways to un-mis-guide them without cheesing ’em off. Try to.

Problem: I don’t know how to file Winstead into this.

Second problem: It isn’t just Winstead. There are quite a few like her.

What’s the difference between being a dark-hearted Jezebel and being a thoughtless bitch? It’s the difference between the active and the passive. I don’t think Winstead really wanted kids to go missing by the dozens and then turn up dead. She just wanted to get her little joke out there. No, I agree the apology doesn’t let her off the hook, because when you really mull it over awhile you see it’s one of those apologies for getting caught. She made a very hateful remark, which was worth making because it was hateful against the right people. And, I’m picking up that it was very important for her to get it out there, toot-sweet, before someone else thought of the same thing and beat her to the punch. That does seem to be when the bad judgment comes out.

Can I pigeonhole her with the genuinely well-intentioned liberals who just want to be kind all the time? The sweet, cheerful Aunt who’s been voting for democrats since Roosevelt, and finds a way to change the subject[7] whenever you point out that logic and history agree[8] the minimum wage exacerbates unemployment[9] for young people? And here’s my dilemma: I don’t think I can. It isn’t fair to the Auntie, who at least gives a shit. Lizz Winstead obviously doesn’t. She, along with the people like her, are all too busy being “funny” and making their “jokes.”

So I guess, with this new experience in my rear-view mirror and a bit of introspection and “exospection,” we need a new middle-tier. We have the generals, think of those as Barack Obama’s inner circle right now, the people who figure out absurd silly things like: Pass this gun control bill, pass ObamaCare, pretend John Kerry is the best Secretary of State we could possibly have…based on God only knows what kind of motives they’re hiding from everyone else. There are buck privates, who might have wonderful intentions but don’t know a damn thing and can’t be told anything, the dear old aunties. In between we have, dunno what “rank” we’d give them, Staff Sergeant or something? The “noncoms.” They aren’t at the bottom of the food chain, because they get this thrill out of making their “jokes” which are really nothing more than efforts to tell others what to support, what to oppose, what to think. With little punchlines at the end, so they can pretend what they just said is some kind of a “joke.”

But they don’t formulate what they’re selling. They don’t decide what that’s going to be; they’re not “brass.” They just pass it along, bludgeon others into believing in it and supporting it.

They’re not funny. They’re just plain mean. Just not actively mean. They’re passively mean. The truth is, they really don’t give a crap about dead kids, if while the kids are alive they happen to be living in the wrong, red states. They care about looking like they care, so they can keep their good reputations. Which they can then use to sell the agenda. Formed and shaped by the brass, to the kindly old buck-private aunties, who genuinely do have and maintain this compassion for kids and other human beings, that these noncoms only pretend to have.

The top tier is the apathetic, the bottom tier is the ignorant, and this middle one is both. We have to acknowledge it’s there, because there is a danger that these buck-private compassionate aunties might, after a time, be “promoted” and lose their compassion. That’s the trouble with these noble, glorious movements that are supposed to change the world: Sooner or later, this drive to help people who need the help, checks out. And it’s replaced by this other darker ambition to lock the sites on the opposition, and blast away. Beat them. Vanquish. Win. Grind ’em into the dirt. Really show ’em what-for.

I don’t want to pretend to know a lot about this Lizz Winstead person, because I just heard about her for the first time. But with this charge-and-retreat thing she did here, she’s not that hard to read. She has rounded that bend. She’s not alone. It’s been growing, as a big national problem, for a long time.

Cross-posted at House of Eratosthenes[10] and Rotten Chestnuts[11].