As I posted on Sunday[1] this alleged incident occurred the prior Monday according to the New York Daily News.:  Why did it take 6 days for this story to make the press?:  I suspect it was purposeful because it involved Black on white crime.:  Had this been a group of whites kicking the crap out of a white couple, it would have been reported within hours of the event.:

The Stir Café[2] reports how many times have you been stopped at a red light that turned green and have become frustrated by a pedestrian taking his time to cross the road? If you live in a city, it’s something that happens on almost a daily basis. Chances are, you take a deep breath and leave it well enough alone. Or maybe you honk once and get a dirty look in return. Well, for one couple in Brooklyn, their reaction to this same situation made them victims of a brutal attack and has put them in the center of what some are calling a racial hate [3] 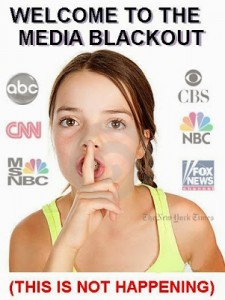 Ronald and Alana Russo, who are Caucasian,: were driving by a popular mall in Brooklyn on an early Monday evening when they stopped at a traffic light. As the light turned green, a group of 10 African American teens, whose ages ranged from 12 to 18, were reportedly crossing the street. Because he figured he had the right of way, Ronald honked his horn, which reportedly spurred the teens to begin kicking the couple’s car.
Ronald got out to assess the damage to the car — a bold, but not totally crazy thing to do, particularly when you figure you’re dealing with kids and what’s the worst that can happen — and then the worst happened. The teens punched and kicked Ronald in the head, leaving him with a fractured nose, broken septum, blood clot, and damage to his shoulder. They also reportedly called him a “white motherf****r” and shouted, “Get those crackers!” and “Get that white whore.”

Not content to just brutally beat the man, his wife — who was attempting to call 911 — was dragged to the ground by the 12-year-old. Her head was slammed against the pavement and she suffered a black eye, bleeding, and difficulty breathing. Since the incident, four teens, including the 12-year-old, have been arrested and police are still searching for other suspects.

Originally posted on The Last Tradition[6]