Every time I turn on NBC or CNN the reports from Gaza are always the same. The images 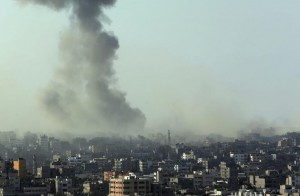 [1]are limited to what’s happening to the Palestinians without explaining the why.

This is not objective journalism!

What ii amounts to be is Hamas propaganda designed to illicit sympathy from an ill-informed public. Israel is painted as a ruthless aggressor doing violence to a peaceful people just trying to live their lives. In peace

The media neglects to mention that the Palestinians have been lobbing rockets into Israel for months.

The media neglects to mention that millions of U.S. Taxpayer dollars given to the Palestinians have been spent for the building of tunnels into Israel for the sole purpose of launching terrorist attacks.

The media neglects to mention that Israel takes great pains to warn Palestinians prior to upcoming attacks so they can leave the area.

The media neglects to mention that Hamas purposely launches their attacks from schools, hospitals,, mosques, and private homes for the sole purpose of using their own people as human shields and propaganda devices so NBC and CNN show images the dead.

I often refer to the U.S. media as the corrupt media because they side with the Palestinians even though they are led by Hamas, a terrorist group dedicated to the destruction of Israel.

The truth is Palestinians teach their children to hate Jews. These are evil people that no other Arab country is willing to take in because they want no part of Palestinian thrust for blood.

Israel has the right to defend themselves from evil people who want to destroy them. It’s a right every sovereign country has. But, the media twists the narrative into something that doesn’t represent the truth. It’s a disservice to the state of Israel and the world.

Propaganda is not journalism and NBC, CNN, BBC and all the others disseminating false information is loathsome.