Megyn Kelly Asks: Why Not Try To Impeach Obama? 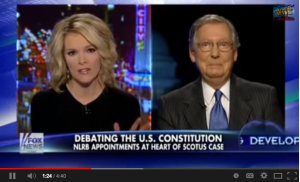 Megyn Kelly asked the unaskable question of Senator Minority Leader Mitch McConnell in regards to Obama’s presidential power grab, which is now being deliberated upon in federal court. “We’ve had lawyers, constitutional lawyers come on this show and say, OK, so when that happens,” Megyn Kelly said after a short discussion of the issues. “When you have a president who, in your view or the view of some, is out of control in terms of overreach, you as the lawmaker really have two meaningful options. And the main one that has been used historically is, try to impeach him!” “I mean, is that ever considered?” Kelly asked. “As opposed to running into the courts and trying to get them to do it?” McConnell’s eyes lit up upon hearing the question. He deftly replied that defunding Obama’s legislation was a “less dramatic response,” although he refused to directly address impeachment. Part of that issue, he notes, is that the Democrats control the Senate.

And, the Senate is where the trial would be held. Democrats only care about power grabs if it’s a Republican doing it. After all, tyranny is part and parcel with liberalism. Here’s the video: