Enough about Holy Teleprompter Man. Let’s take a look at the people who work for Him. This is important. He sets the agenda, but these people carry it out.

Item: So much depends on their elitism, we may as well begin with that. Shortly after the electoral victory of He Who Argues With The Dictionaries, I had noticed[1] the contradiction within modern liberalism that becomes irreconcilable and ultimately self-destructive when the liberalism wins elections. It wins these elections in service of a goal of “re-educating” us, by which I mean everyone…but I don’t really mean the classic definition of “everyone” because that isn’t what they mean. They want to take all of these ideas that don’t fit in with their own, and render them ineffectual. They want everybody who fails to believe, to either convert or die. But not all of us are to convert, and maybe all of us are not to die either. A complete victory here would ruin them[2], I said, because if everybody everywhere is in complete agreement that the liberal ideas are the right ones, then how do you prove yourself to be special by believing in those ideas? You can’t; therefore, this isn’t what they want. You can’t be in the elite club if someone isn’t being left out of it. So to be victorious, the liberal must prevail, and yet to achieve mere significance, the liberal must see to it that the conflict continues after he has prevailed.

Item: Last month, during a “discussion” with liberals about their most powerful females being consistently ugly, I noted on blogger friend Mark’s blog[3] that Supreme Court nominee short-lister Elena Kagan was a dog. (She was, as we all know now, subsequently nominated.) If I were pointing out an isolated incident, that would of course be a cheap shot…and maybe it still is, but the fact remains this is part of an enduring trend. Our progressive “friends” remain ignorant, or put on a good show of remaining ignorant, of the plain, simple and undeniable fact: After the trend has played out for so many decades, whatever vestigial belief remains that these females are being picked for their qualifications, has to dissipate. It is the same situation that would exist if the same forty years ticked on by, with each female nominee to a position of power looking like a Playboy centerfold. Some competent women are homely; some are gorgeous. To so consistently avoid either extreme in service of some goal involving packaging, is detrimental to whatever cause depends on competence. Doesn’t our strength, our progress, depend on diversity? Where’d the diversity go? How come every left-wing power-chick looks like Shrek, except with the massive head slightly melted? Life-long bachelorette, white, nose the size of a large doorknob, hair looks like she’s made-up to play the wicked witch in a Hansel and Gretel school play. You halfway expect to see spiders or cockroaches crawling out of it.

Item: Arthurstone, trying to slam me (the slamming is obligatory when someone says something un-politically-correct, because silence equals consent don’cha know), in his exuberance and incompetence revealed a little bit too much[4] about the plan:

Let’s call that the Arthurstone-discipline-of-liberalism: Manifesting some inner personal decency you may or may not really have, by showcasing your inattention to obvious fact. Kind of a modern, sickly variation of the parable about The Emperor’s Clothes…in reverse. 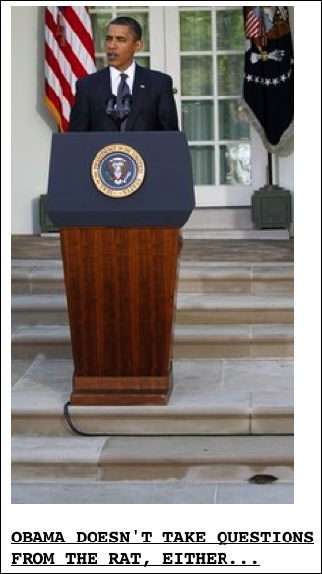 Item: In the wake of the whole “rat photo” thing, blogger pal Gerard made the comment[5] about the scene-stealing rodent,

The Rat’s either deserting the ship or applying for a job.

Item: The highly opinionated U.S. Attorney General Eric Holder was caught not knowing a godd*mn thing about[6] the subject of his uninformed blatherings.

Item: Blogsister Daphne said[7] Holder, who is black, is

…an affirmative action baby, and we all know it. Obama’s whole house is full colorful incompetence, that’s the way the liberals play. Shade over matter.

And then followed it up[8] (knowing full well what was coming) with “Yes, I am a racist. Deal with it.” But this has nothing to do with race…as was aptly demonstrated when…

Item: Blogger friend Rick brings us the story[10] of a respected scientist who was brought into President Obama’s brain trust to figure out ways to clean up the oil spill, and then summarily dismissed[11] from it when someone figured out his ideas weren’t quite right:

A St. Louis scientist who was among a select group picked by the Obama administration to pursue a solution to the oil spill in the Gulf of Mexico has been removed from the group because of writings on his website, the U.S. Energy Department confirmed Wednesday.

Washington University physics professor Jonathan Katz was one of five top scientists chosen by the Department of Energy and attended meetings in Houston last week.

Though considered a leading scientist, Katz’s website postings often touch on social issues. Some of those writings have stirred anger in the past and include postings defending homophobia and questioning the value of racial diversity efforts.

The question that arises is: What exactly does it take to successfully serve in President Obama’s cabinet…His innermost circle…or anywhere near 1600 Pennsylvania…or His kinda-sorta inner circle? Who are these people who wield all this power, these people who we are constantly told are oh-so-smart and will bring us all these wonderful results, just as soon as they stop talking about how wonderful they are and how wonderful their boss is, and start working on something? What makes them what they are, and what are they?

And the answer is starting to emerge.

We can tell by looking at them that they are pretty men and ugly women. That has been such a constant for so long that it seems discourteous not to take the time to notice it, after they’ve taken such trouble to persevere in the pattern. Nobody anywhere is asking the question, but it’s certainly a good guess that the clothes worn by pretty-men and ugly-women alike, cost more than anything ever worn by any Republican Vice Presidential candidate since, well, ever. They are book-smart, mostly from their college experiences many years ago when they were forced to read a bunch of garbage; lately, most of them don’t read very much, which stands to reason because they are not held to a standard that involves the production of good results. If that were the case they wouldn’t be liberals, of course.

They are not valued because they have noticed things. If anything, they are valued for not-noticing things. Which fills them with an adrenaline, a drive, to not-notice even more things. Arthurstone proved that much. As far as I know, he doesn’t serve on any special board fulfilling some Obama agenda, other than to log on to blogs that disagree with his ideas and enter silly nonsensical comments there. But hey, he’s got enough of the technique down that he’s worth watching; he is a dim, shadowy reflection of the folks in charge. They are pretty excited about not-noticing things, too.

But the most important thing worth observing about them is this: They do not really have ideas. Not novel ones, anyway; the ideas they do have are merely echoes of ideas someone else has had, which is to say they may as well not have any. I said something about producing good results — that, clearly, is not on the table. Had Professor Katz demonstrated only negligible promise of solving the oil spill crisis, but kept his ideas in line with what was expected of him…which means, kept them progressive and unremarkable…he’d still be in the brain trust. But his written ideas about entirely unrelated subjects are not to be tolerated. Don’t let the doorknob hitcha where the Good Lord splitcha, Prof. Katz, and that would remain the outcome even if you were an oil cleanup superhero.

The criteria is ideas, not results. But not ideas, either. Non-idea ideas. Provide the proper echoing resonance for ideas that have already been created by someone else. Reflect the ideas properly. Give them the right packaging. Be pretty if you’re a man and ugly if you’re a woman.

Are you ready for something really scary?

The Katz story is how these people respond to a real crisis. And we are stuck with their “leadership,” if you want to call it that, for at least thirty-two more months. Milquetoast ideas, no positive results, no priority given to the results, lots of pretty men and ugly women.

This is supposed to be all about “change,” remember that? You never seriously believed that did you? Keep your expectations low, you’ll never be disappointed.

Cross-posted at House of Eratosthenes[12].