Militias descend on Nevada ranch as threat of violence looms

The stand off between Nevada rancher: Cliven Bundy: and the: Bureau of Land Managementcontinues, and the potential for deadly violence looms large. 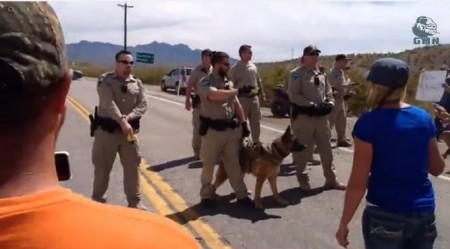 A West Mountain Rangers militia member who arrived Tuesday told the Review Journal that groups are coming from as far away as New Hampshire, Texas and Florida and the numbers could be in the hundreds.

“We need to be the barrier between the oppressed and the tyrants,” Ryan Payne: said. “Expect to see a band of soldiers.”

Payne and fellow militia member: Jim Lardy are armed and ready for confrontation, but insist they will not initiate the bloodshed.

Nevada Republican state Sen. Peter Goicoechea, a rancher himself, is worried about a violent outcome.

The dispute[3]: with the federal government is over Bundy cattle grazing on public land, with the family claiming ancestral rights. The: Bureau of Land Management says the “trespass cattle” have been allowed to graze on these lands illegally and have been rounding up the livestock.

A statement was released by federal agents on Wednesday’s incident, theJournal Review reported. The feds say peaceful: protests have “crossed into illegal activity,” with Bundy supporters “blocking vehicles associated with the gather, impeding cattle movement, and making direct and overt threats to government employees.”

In his own statement, Nevada Gov.: Brian Sandoval expressed concern about an “atmosphere of intimidation.”

“No cow justifies the atmosphere of intimidation which currently exists nor the limitation of constitutional rights that are sacred to all Nevadans,” Sandoval said.

As tensions continue to mount, comparisons are being made with Ruby Ridge and Waco, where confrontations with federal agents turned deadly. We should hope that the current stand off turns out better, but armed militia on the ground are not a good sign.

This post was used with the permission of Bizpac Review[4]