The Mississippi House passed three gun laws Tuesday which should, in theory, keep the government from seizing firearms during a state emergency. : In theory[1]…

The House on Tuesday passed a trio of gun-rights bills – one to prevent local governments from buying guns to destroy them, another to make clear local governments can’t seize guns during states of emergency or martial law and one clarifying state gun laws preempt local ordinances.

House Bill 485, passed unanimously, says cities and counties having gun buybacks must offer the guns for sale to licensed gun dealers and can junk them only after proving they are of no value.

House Bill 705, passed 112-2, would prohibit confiscation of personal firearms by local governments after emergencies or if martial – military – law has been declared. House Judiciary Chairman Mark Baker, R-Brandon, said there were reports of such in New Orleans after Hurricane Katrina.

House Bill 314, passed 85-33 on Tuesday, would clarify that city and county governments “may not interfere with the right of citizens to possess firearms” and that state gun laws trump local ones.

Look, that’s neat and all, but let’s be realistic. : There’s only one thing that’s going to keep a motivated government from jacking your arsenal. 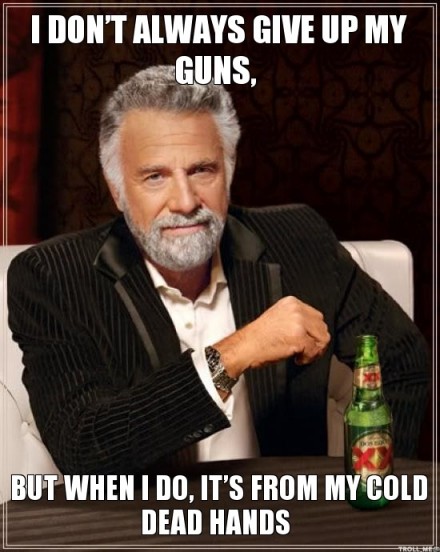 The power lies in the hands of the owner. : You either surrender, or you don’t.

There’s no law that matters when the government is lawless.

See also: : Mother begs police for help for TWO DAYS before her son, 14, was found strangled by her husband, then she is locked in a psych ward for six weeks.