Welcome to a Brave New World:[1] 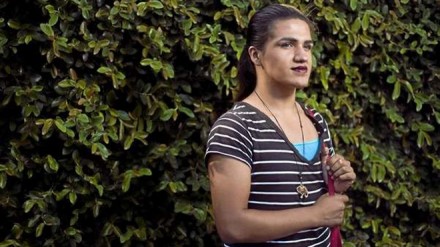 A male California high school senior who played on the boys baseball team as a freshman will now play on the girls softball team.

The: student, Pat Cordova-Goff, attends Azusa High School in the northeastern corner of the suburban sprawl of Los Angeles.

Cordova-Goff (who was also a cheerleader at some point) will be the California’s first transgender high school student-athlete,: reports The San Gabriel Valley Tribune.

The strapping, broad-shouldered, 5-foot-8 senior is able to play for the Azusa High Aztecs under a new state law commonly known as Assembly Bill 1266. The amendment to the state’s education code stipulates that each student will have access to facilities, sports teams, and programs that are “consistent with his or her gender identity,” rather than the student’s actual biological composition.

Cordova-Goff, 17, was born a boy – and, by all accounts, remains a boy – but now identifies as a girl. He has undergone no surgical procedures or treatments.

He doesn’t need to. : He just needs to say he’s a girl and POOF!

Meanwhile, “she’s” got the body of a boy.

Tell me in the comments.

See also: : : Gays are the new Blacks for Progressives