Mother begs police for help for TWO DAYS before her son, 14, was found strangled by her husband, then she is locked in a psych ward for six weeks.

As a handsome married couple, Christina and Sonny Schumacher had what seemed to be the perfect life from lavish trips and an expensive home: to private schooling for the children. Christina had everything any woman would want, little did she know that her husbands needling and abusive: banter would one day turn into violence no mother should ever have to witness.[1] 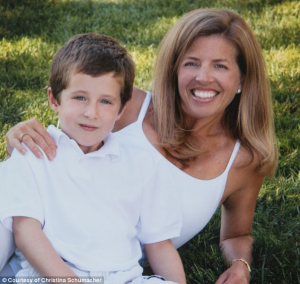 The physical abuse steadily escalated over the years.

She says: ‘He would do it in sly ways. With Gunnar he would say, “Let’s wrestle” but every time my son would end up crying for help. With me he would do things that wouldn’t leave marks. He had all sorts of military pinches and holds, he’d do stuff to my neck so I couldn’t breathe.

‘He would say “It’s my word against yours and I’m a military officer so who’s going to believe you?”’

He was the head of a successful, ideal family.

According to Christina: ‘He created his own identity. He created Sonny — he used to be Ludwig. His whole life was a faÃ§ade. I was his Stepford Wife. And he controlled my poor kids, especially Gunnar.

As things spun out of control Christina separated from Sonny and shared custody with the children though their daughter refused to stay with her father. After a couple of disturbing weeks of phone calls from her son, Gunmar,: about her husbands erratic and abusive behavior, Christina felt something was wrong and took her fears to authorities. Getting no help from them: Christina made a plan to get full custody. Before she could put her plan into action one night she started receiving calls from her sons friend who was worried that he wasn’t returning calls or texts. After days of warning the police that something was wrong and being ignored she saw a news report: showing her husbands apartment.

Christina Schumacher knew her son was dead before she reached the top of the stairs. And she knew that his father had killed him. The moment her eyes locked with those of the officer blocking the apartment door ahead she knew that the worst had already happened.
Forty-eight hours earlier she had pounded the desk of the local police station saying, ‘Help me my son is in danger.’ She had called family and friends. Finally she had called Amber Alert. She had done everything she could to prevent this moment and now it was too late. She let out a scream that seemed endless.
On Wednesday December 18, Christina’s estranged husband, Ludwig ‘Sonny’ Schumacher, 49, and their fourteen year old son, Gunnar, were found dead in Sonny’s Essex, Vermont, apartment. Sonny drugged and strangled Gunnar before hanging himself several hours later. But for Christina, 48, that wasn’t the end of the nightmare. Within 24 hours she had been involuntarily admitted to a secure psychiatric unit.

She stayed there for five-and-a-half weeks before a judge ruled that the grieving mother should never have been locked up in the first place. He released her with an apology for all that she had gone through.

Christina saved her own and her daughters life by pushing past critics and following her gut instinct and staying away. If you or someone you know is suffering abuse don’t be afraid to stand up and speak out until you are heard.

See also,
Man gets max sentence for raping toddlers while wife held them down[3]