Mary Ann Mendoza, the mother of a police officer killed by an illegal immigrant, has released an open letter to Barack Obama[1] about the insanity of open borders. 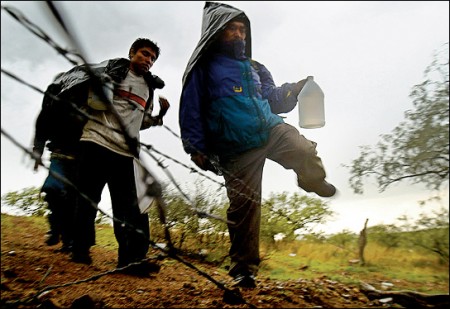 [2]
Brandon Mendoza was killed in a head-on collision with an illegal immigrant who was driving the wrong way while drunk and high.

“I am writing this letter to you regarding illegal immigrants.

“As a tax paying, law abiding citizen of the United States, I WANT my voice heard on this issue. My son, Sergeant Brandon Mendoza, an officer who was with the City of Mesa, Arizona police department, was killed in a tragic head on collision on May 12, 2014 by a wrong way driver on our freeways. This man happened to be an illegal immigrant, was in this country illegally, convicted of previous crimes, no Social Security number, no valid driver’s license BUT he had purchased a vehicle and registered it to drive in Maricopa County Arizona.

“I had my son’s life STOLEN from me by a man who didn’t value his life, was 3X the legal limit drunk, was high on Meth, drove for over 35 miles THE WRONG WAY on 4 different freeways and had NO BUSINESS BEING IN THIS COUNTRY!!!

“The Federal Government knew he, Raul Silva Corona , was an illegal immigrant when he was convicted on crimes in 1994 in Colorado. The prosecutors were “lenient” on him and several charges were dismissed. When he was convicted of these crimes and 1994 and the government knew he was in the country illegally, why wasn’t he deported? Why are any of these illegal criminals in this country ??

“I am furious that the Federal Government allowed this criminal to stay in this country and KILL my son! I have attached several articles for you to PERSONALLY read about my son. He was an Icon with the City of Mesa Police Department. He was instrumental in making life better for people of all walks of life in the park project he took on. He was humble, selfless, worked many hours off the clock helping disadvantaged children and often used his own money to do things for the community, including “adopting” children at Christmas to provide them with gifts….out of his own money!!

“I have attached numerous articles for you to read about my son. This was not a life that should have been taken so early. The good he was doing in our community is remarkable, the difference he made in people’s lives is amazing and the comfort he brought people in friendship was unmeasurable.

“All you have to do is Google ” Sgt/Officer Brandon Mendoza” and you will have plenty of reading material about my wonderful son who had just passed his Sergeant’s exam to become a Sgt. The Chief of Police posthumously promoted him during the week of his funeral but that highlight of his life was stolen from him!!! He was officer of the year last year. Officer of the quarter for the first quarter of 2014. He was only 32 years old and had done more in his life than most of us have done in a lifetime!

“I am going to have my voice heard and I want to you to know what my personal feeling is on whether CRIMINAL ILLEGAL IMMIGRANTS should be allowed in this country. I have been DIRECTLY affected by this. I am sure if your life had been affected like mine has been, you would have a different view of this situation. I have lived in Arizona most of my life. My son, Brandon Mendoza, was half Hispanic. It’s not the color of skin that my son or I see, it’s the person and how they conduct their lives. If you can’t enter this country legally then you shouldn’t be here. If you commit crimes, you should pay the time any of us as US Citizens would have to serve. Letting these illegal criminals out of our jails before their time is served and turning them loose on the streets to commit further crimes and KILL our loved ones is NOT ACCEPTABLE TO ME!! AND it shouldn’t be acceptable to any US Citizen. Mr. President, you don’t have the right to make this decision yourself……I have a say, even if it is for one moment. Maybe that one moment will light a spark with another citizen who can then light a candle, who can then light a bonfire, who can then light a city up and so on. My light has just been lit and I am not going to back down when so many of these illegal immigrants have more rights than we do. My son’s death will not be ignored as another statistic.

“I want laws to change that would not allow illegal immigrants to purchase vehicles in our country and register them to drive them in our states WITHOUT having driver’s licenses to drive them legally. How is this happening??? I want laws changed that will force the removal of illegal immigrants who break our laws. This man, this repeated law breaker, was allowed to be released and he continued breaking the laws in our country until what???? UNTIL HE WAS STOPPED BY MY SON IN A HEAD ON COLLISION THAT NEVER SHOULD HAVE HAPPENED!!!! HE KILLED AN OFFICER OF THE LAW AS HIS LAST ACT!!! When are you going to see the flip side to this issue? When will you realize the hurt and pain and destruction these illegal immigrants who break the law will continue to cause???? Until you live in a state that deals with this on a daily basis, you will not understand it.

“I want answers that make sense. I want answers from you personally as to why this criminal was allowed to stay in our country until he took my son’s life.

The worst part? The federal government has known about this illegal since 1994, when he was first convicted of crimes in Colorado. For some reason, they decided this is exactly the type of immigrant we want in our country and let him stay. I’m sure the drunk, cop-killing meth head was just trying to make an honest living doing the jobs Americans won’t do.