IN 1949 J. Edgar Hoover (Director of FBI) and William Kinsey Hutchinson (Editor-in-Chief for International News Service were discussing ways to promote capture of the FBI’s “toughest guys”. They came up with the FBI’s 10 Most Wanted List. A Salvadoran thug who executed his 19-year-old ex-girlfriend and let fellow gang members shoot her terrified two-old-son as he grabbed his leg for help has been added to the FBI’s ‘Ten Most Wanted Fugitives’ list.[1] 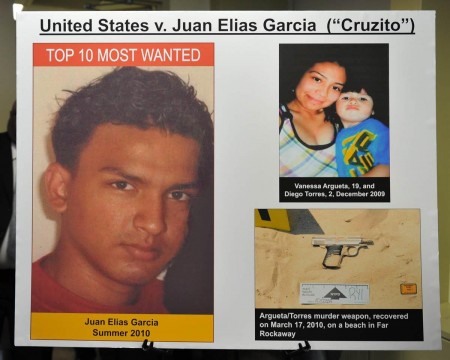 MS-13 gang member Juan Elias Garcia, 21, whose last reported sighting was somewhere in Honduras in 2011, is the fourth person sought by federal authorities in the Long Island killings of 19-year-old Vanessa Argueta and her 2-year-old son Diego Torres, said George Venizelos, the FBI assistant director of the New York field office.
Garcia, who is 5 feet 4 inches tall, and weighs 125 pounds is a native of El Salvador and is the first MS-13 gang member to make the bureau’s most wanted list.

He allegedly brought Argueta to the woods of Central Islip, Long Island in February 2010 under the ruse of taking her to to dinner, Venizelos said. Argueta was accompanied by two other reputed MS-13 members who had received permission from the gang’s leader to carry out the killing, Venizelos said.

One of them shot her in the chest and head because of alleged threats made toward Garcia by rival gang members to whom she had ties, according to Venizelos.

‘Once on his feet, Diego saw Garcia, a familiar face in the crowd, and clutched onto his leg. However, the violence did not stop. Guzman fired the second shot that struck Diego in the head and killed him,’ Venizelos said.
‘Garcia decided that penalty for disrespecting the gang was death,’ Venizelos said. ‘While crime and gang-related activity often goes hand in hand, the execution-style murders of Vanessa and her 2-year-old son is a new low even for MS-13.’

Garcia, who was only 17 when the crime took place, is alleged to be a member of the violent Mara Salvatrucha gang, known as MS-13, and is believed to be hiding in El Salvador, authorities said Wednesday.

Truly a savage man who can allow a familiar child clinging to his leg to be shot in the head twice needs to be taken out of general population. Hopefully, you will pass this along so this monster can be caught as soon as possible.