Without having to show ID to vote, anyone can go and vote in the place of a dead person. That’s the case in Michigan where a dead woman votes in Detroit.[1] 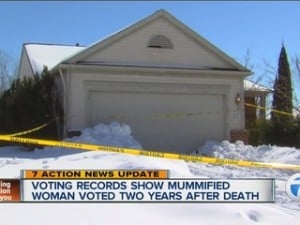 The case of a Michigan woman whose mummified body was found years after her death is getting even more bizarre. Apparently, Michigan records show she voted in 2010 — two years after authorities believe she died.

Sometime before she is believed to have died, Pia Farrenkopf asked her mail carrier in Pontiac not to drop mail off at the home, saying she often traveled for work and did most of her correspondence online.
“There was a long-standing agreement with her carrier that her mail should be returned,” said Ed Moore, spokesman for the Detroit district of the U.S. Postal Service.

With no mail stacking up at Farrenkopf’s home on Savanna Drive where she lived alone, a neighbor mowing the lawn, bills automatically being paid from a bank account and neighbors thinking she moved or was traveling, there was nothing to raise suspicions that the garage of the ranch house for years held a secret – mummified remains, believed to be Farrenkopf.

“All these things kind of led to the perfect storm of no one saying, ‘What’s going on there?’ ” Oakland County Sheriff Michael Bouchard said. And Monday, a new mystery emerged about the woman thought to have died in 2008. Voting records in Oakland County show Farrenkopf, who has not been positively identified by the Medical Examiner’s Office, is shown as voting in the November 2010 gubernatorial election.

The article mentioned it being a possible “clerical error” trying to say it wasn’t fraud. Clerical errors of an unintentional vote cast makes me even more concerned about the voting systems in place in America. In a world where you have to show your ID to get a job or board a plane, it seems more than logical that individuals must present an ID when hiring the civil servants who will be making decisions over their personal liberty. Americans should cry from the mountain tops to require showing an official ID to vote.

Also,
Lib Women and Girlscouts of America Want To Ban The Word “Bossy” Because It’s Sexist[3]