The Empire State Building is a private organization and if they don’t want anybody praying on the 86th floor observation deck, I don’t see why this case hasn’t been thrown out of court yet.:

New York Post[1] reports a Muslim family from Long Island slapped the owners of the Empire State Building Tuesday with a scathing $5 million lawsuit that claims they were booted from the building’s observation deck for praying. 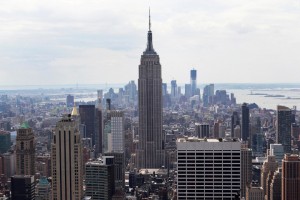 [2]Fahad and Amina Tirmizi of Farmingville said their civil rights were violated when they were “assaulted, battered and forcibly removed” from the famed observatory last July.

The suit, filed against Malkin Properties, security company Andrews International Inc. and others, claims that Fahad, 32, and his 30-year-old wife were unfairly targeted because they were Muslim and wearing traditional Muslim attire.

“We weren’t doing anything wrong,” Fahad said. “We just wanted to enjoy the view like everyone else.”

The couple and their two children were on the 86th-floor outside deck when they walked over to a quiet spot to recite evening prayers, the suit says.

Although Amina briefly prayed without incident, a security guard quickly confronted Fahad and “menacingly poked” him and loudly told him he was not allowed to pray on the deck.

Another guard joined the fray and told all the family members that they had to leave, and “forcibly escorted” them down to the lobby and out of the of the building, the suit says.

I believe this is another attention grabbing lawsuit to push the Muslim agenda similar to Gays targeting Christian businesses for the sole purpose of filing lawsuits to put them out of business.:  Makes me wonder if the owners of the Empire State Building are Jews.:  That would complete the circle for sure.:

This couple could have prayed somewhere else before entering the building.:  They weren’t there just to enjoy the view.:  They got exactly what they came for, a confrontation in court.: