America…land of the free and home of everything P.C.

I am so tired of religious groups trying to use “I’m offended” as if it should make me suddenly change what I find ok or acceptable, and accommodate them. Forget you, this is America, and we eat bacon here! 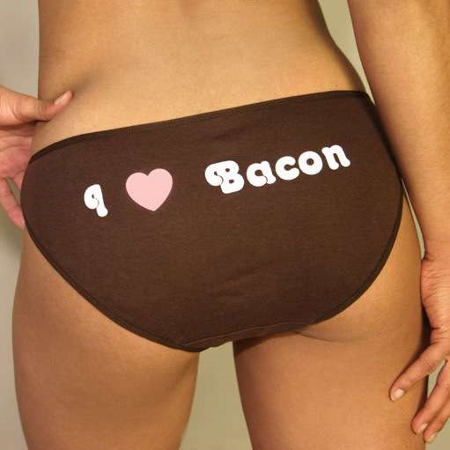 The sign was put up as part of a city program that allows businesses to post an advertisement in an area where they have helped maintain city flowerbeds. The sign that read “Yield Sneakers Bacon” was removed after a woman, identifying herself as a Muslim, posted in an online community forum, stating she was personally offended by the sign, according to a WPTZ News report[3]. WPTZ wrote that the woman who complained online called the sign “insensitive to those who do not consume pork.”

Saturday morning the restaurant posted to Facebook, “We are here to serve people BREAKFAST, not politics. We removed the sign that was located on public property as a gesture of respect for our diverse community. There were also concerns raised about safety(emphasis added). Removing it was not a difficult decision. We still love bacon. We still love eggs. Please have the political conversation elsewhere.”

OK, I might buy the “serving breakfast, not politics” if they hadn’t mentioned a safety concern. Really? Cause I know, between the two, breakfast is usually way more dangerous than politics ever are. Give me a break and say what you mean to say. You don’t want to offend a minority group that could easily eat anywhere else for breakfast. I am Jewish myself, and I don’t eat pork. Do I think that gives me any special rights when I go to a restaurant to tell them what ‘offends’ me on the menu? Hell no! Who the heck am I to tell them how to run their business? If its that bad I won’t return, but I am certainly not going to blast them on social media or embarrass my friends. At least not embarrass them any more than usual, LOL. : Quit being so P.C., America.

DISCLAIMER: While the author is Jewish and does not eat pork products, she does enjoy Turkey Bacon on a weekly basis, usually: at a dangerous breakfast while watching FOX News.

The 15 Best Conservative News Sites On The Internet[5]

Obama Voters Say You Have to Pay Their Way[6]