‘My son was a beautiful woman’: Heartbroken mother mourns death of transgender woman Vaugh-Islan Nettles fatally beaten in Harlem by thug in latest string of alarming hate crimes to plague the city

Here’s the deal.:  A lot of New Yorkers are still very upset that Gay marriage was passed via the votes of politicians in Albany instead of the citizens of state.:  Progressives forced this upon the people two years ago and that’s why there’s an increase in these types of incidents.:

Liberals are quick to cry separation of church and state when people of faith question the morals of society today.:  But they have no problem imposing progressivism (acceptance of homosexuality, sex changes, transgender kids using opposite sex bathrooms, etc) upon everyone else without concern about how they feel about.: 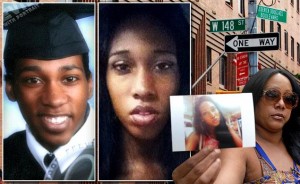 It was the latest in a series of troubling bias attacks in the city, which is on pace to double the number of crimes against the gay, lesbian, transgender and bisexual community in 2013 compared with last year.

In the most recent assault, Paris Wilson, 20, repeatedly punched Islan Nettles, 21, in the face after he and a group of friends spewed slurs at the victim, cops said.

Nettles had two Facebook profiles – one identifying himself as man and using his birth name, Vaughn Nettles, and another as a woman.

Delores Nettles said her son was walking with two transgender friends on W. 147th St. near Frederick Douglass Blvd. early on Aug. 17 when the conflict began in front of a police stationhouse.

Cops said Wilson – about to enter his senior year at Buffalo State University – continued the beatdown, even after Nettles fell backward and struck his head on the pavement.

One of Nettles’ friends ran inside and alerted cops, who found the victim “unconscious on the ground with a swollen shut eye and blood on her face,” according to a criminal complaint.

Police arrested Wilson on a misdemeanor assault charge after Nettles’ friend identified him.

“My son was a beautiful woman.”:  For billions of people around the word far beyond the streets of New York City, that’s an incredible statement.:

Her son was born a male and for many that’s the way he ought to be.:  Progressives distort the issue by calling such a way of thinking as bigoted.: :  But where are the successful progressive policies?:  Detroit?:  Greece?:  Spain?:  California?:  They pass themselves off as the smartest people in the world and yet they bankrupt countries and cities, break up the black family, throw prayer of the public schools and are astounded when everything falls apart.:

I feel for this mother who lost her child.:  I lost one too.:  But her son’s death was the fault of a progressive lie that never should have been told.: :