The argument that it’s “racist” to require voters to show photo ID at the polls is ludicrous on its face. People in this country have to show photo ID when they buy alcohol, board a plane, open a bank account…or participate in an NAACP rally against photo ID laws[1]. 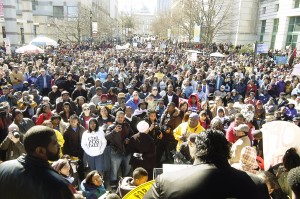 Did they even think before they sent out this flyer?

The NAACP will be holding a march to protest voter ID laws. In order to attend, all members are required to bring along a photo ID.

In a flier entitled “Important Dos and Don’ts for Marchers!!!,” the NAACP state at the top that all protesters conduct themselves “in accordance with the historic custom of the Civil Rights Movement.” They should also listen to their “marshals at all times” and follow the “Dos” and “Don’ts” underneath the opening paragraph…

…In the middle of the list, however, is a drastically ironic “Do.” To go to the rally, you are asked to have “photo identification (driver’s license, passport or other valid photo id) with you and keep it on your person at all times.”

I guess this proves they don’t even believe their own BS about photo ID laws being a racist ploy to stop minorities from participating in public life.

Also see: The 15 Most Annoying Things About American Culture[3]