In the past few weeks since the election of Bill de Blasio New York City has suffered an increase of gun violence. 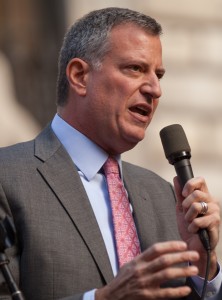 The criminal element in the city have been given a unofificial green light to carry their guns as a result of de Blasio’s promise to abolish Stop and Frisk.

So de Blasio faces a crisis even before he’s taken his oath as mayor. He either carries through with his campaigne promise to dismantle Stop and Frisk or he renigs on his pledge and leaves it in place.

Thugs and dirt bags are already embolden and de Blasio either beats them back or open the flood gates.