Blogger friend Buck replied[1] to a comment-poster in his own place, who was worried about tax dollars going to support National Public Radio.

Like most dreams… yours has no basis in reality. From The Wiki:

In 2009, member stations derived 6% of their revenue from local funding and 10% of their revenue from the federal funding in the form of Corporation for Public Broadcasting grants.[14][15] NPR receives no direct funding from the federal government.[16] About 1.5% of NPR’s revenues come directly from Corporation for Public Broadcasting grants.

The CPB got $400 million in federal funds last year, a drop in the proverbial budget bucket. The CPB provides funding… in small amounts… to both NPR and PBS, both of which add immense value to our culture.

I presume “the Wiki” refers to the Wikipedia article on NPR[2]. Not exactly going out on a limb with that one, and the quote lines up, she certainly does. Our New Mexico friend has done his homework. 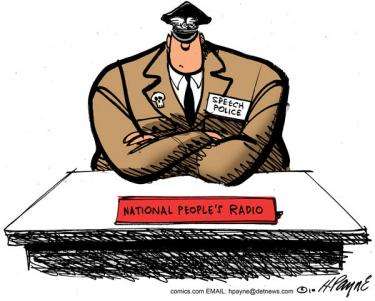 In 2009, NPR revenues totaled $164 million, with the bulk of revenues coming from programming fees, grants, contributions and sponsorships. According to the 2009 financial statement, about 40% of NPR revenues come from the fees it charges member stations to receive programming. Typically, NPR member stations raise funds through on-air pledge drives, corporate underwriting, and grants from state governments, universities, and the Corporation for Public Broadcasting. In 2009, member stations derived 6% of their revenue from local government funding and 10% of their revenue from the federal funding in the form of CPB grants. NPR receives no direct funding from the federal government. About 1.5% of NPR’s revenues come from Corporation for Public Broadcasting grants.

During the 1970s and early 1980s, the majority of NPR funding came from the federal government. Steps were taken during the 1980s to completely wean NPR from government support, but the 1983 funding crisis forced the network to make immediate changes. More money to fund the NPR network was raised from listeners, charitable foundations and corporations instead.

Footnote [16] points to the Ombudsman’s page at NPR. Which sayeth[3]…

How many of my tax dollars go to NPR?

NPR receives no direct funding from the federal government. Less than two percent of the budget is derived from competitive grants from federally funded organizations such as the Corporation for Public Broadcasting, National Science Foundation, and National Endowment for the Arts.

Approximately half of NPR’s funding comes from NPR member stations. In an average year, NPR funds about 45 percent of its operations with membership dues and program fees from member stations. The balance of NPR’s annual revenue is derived from private foundations, individuals and corporations, in the form of grants, gifts, investment proceeds, and corporate sponsorships. NPR receives some revenue from distribution fees and fees from tapes and transcripts.

So everything checks out. Ship-shape. NPR depends, in this day and age, on a negligible and altogether insignificant amount of lucre from the public treasury, which is first laundered through the CPB. It is a piddling amount, a “placeholder” amount…I would call it a “flip the bird” amount. It is dimes and nickels fished out of the couch cushions, moved from one pot to another, just to get the message across that this can still be done. Purely as a “f*ck you” to the people who still believe in a free market. The ladder could be kicked out from under ’em with no consequence whatsoever…it just isn’t going to happen because, well, we like to stick it to the man.

From the e-mails, this afternoon, bearing a signature from the outbox of change.org, my faithful climate change action crew. Just minutes ago:

Led by Sarah Palin, a chorus of commentators including Bill O’Reilly, Glenn Beck, Newt Gingrich, and Karl Rove are trying to paint public broadcasting as the “mouth of socialism” in a ploy to simultaneously attack NPR and fire up their base a week before Americans head to the polls.

In a corporate media landscape where “news” is about little more than partisanship and infotainment, we desperately need a reliable public broadcasting system to provide the essential information for a functioning democracy. Fox News has already poisoned much of our public discourse; we cannot let it and Sarah Palin kill public broadcasting.
:
Palin and others like her are using the controversy over Juan Williams to push for a longstanding goal: the “immediate suspension of every taxpayer dollar” going to public media, as stated explicitly by Bill O’Reilly on his Fox News show.

Heeding O’Reilly’s call, Sen. Jim DeMint (R-S.C.) is reportedly introducing a bill that would zero out funding for ALL public broadcasting, including NPR, PBS, Pacifica and more.

Defunding could not only destroy NPR as we know it, but also deal a significant blow to the entire public interest media sector. We can’t let Sarah Palin and the right wing bully Congress into selling out such an important part of our media landscape. [emphasis mine]

KNOW YE THIS. Yes, I am of the opinion that “public radio” is anathema to a free republic, especially one such as ours that claims to cherish free market principles. However, that is outside the scope from the observation I am making here.

Whether I would shield NPR from the slings and arrows of those who would “defund,” were NPR more to my ideological liking, is absolutely, positively, emphatically out of scope from the observation I am making here.

Juan Williams’ sacking is out of scope from the observation I am making here.

The proper prioritization of the NPR funding issue, alongside all the other things we’ll have in mind as we trudge off to participate in the democratic process this Tuesday (Wednesday if you’re a democrat), is also out of scope from the observation I am making here.

That I would much sooner ask Sarah Palin to watch my house while I’m on a two week vacation, compared to Vivian Schiller, CEO of NPR, is out of scope from the observation I am making here.

Charles Krauthammer’s enjoyable smackdown[4] upon the empty (and rather caustic) head of Nina Totenberg, who remains employed and in the good graces of NPR even with her name chiseled in granite alongside wonderful chestnuts that make Williams’ utterance look positively mundane — is, likewise, out of scope of the observation I am making here.

The observation I am making here is sharp like a scalpel. It is focused like a laser. It is absolutely, positively irrefutable.

The observation I am making here is thus:

Someone is bullsh*tting somebody about NPR’s funding. Not so much the amount of it, but its criticality toward whatever mission it is that NPR is trying to fulfill. It is p*ssing in the ocean…or, it is the keystone of the temple, that once extracted, causes the entire structure to collapse.

It cannot be both.

Who is bullsh*tting me? And how? I have an absolute, sacrosanct right to know…or, at least, I damn well should.

Cross-posted at House of Eratosthenes[6] and Washington Rebel[7].