NSA Spies Most on Americans

Looking at how Feds regulate everything in America, I am not: surprised that the U.S. government spies more on Americans than anyone else in the world to learn how to regulate the people too.[1] 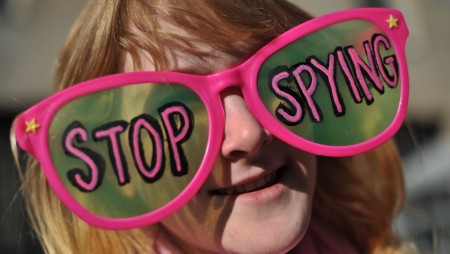 Edward Snowden told a crowd of fans Wednesday that the U.S. government’s surveillance programs collect more data on Americans than it does on any other country.

“Do you think it’s right that the NSA is collecting more information about Americans in America than it is about Russians in Russia?” Snowden said. “Because that”s what our systems do. We watch our own people more closely than we watch any other population in the world.”

The former NSA contractor was awarded the Ridenhour Award for Truth-Telling along with Laura Poitras, one of his chief confidants. The 30-year-old fugitive remains in Russia, where he fled and earned temporary asylum following his disclosures of classified information about the NSA’s bulk data-collection practices.

Poitras also beamed into the ceremony from Berlin. The documentary filmmaker is believed to be one of only two people–along with journalist Glenn Greenwald–to possess the entire cache of Snowden files.

The two collectively lambasted both the Senate and House Intelligence committees for what they said was a failure of sufficient oversight of the intelligence community. Snowden also said he believed the Judiciary committees were more likely to enact substantive surveillance reform, and noted his support of the USA Freedom Act, a bill that would end much of the government’s bulk collection of phone “metadata.”

Snowden, who has also been nominated this year for the Nobel Peace Prize, was a natural choice for the Ridenhour award, which has honored in recent years journalist and undocumented immigrant Jose Antonio Vargas and Thomas Drake, a former NSA official who also exposed secrets kept by the spy agency. The left-leaning group is named named after Ron Ridenhour, a Vietnam veteran who helped expose the massacre of hundreds of unarmed civilians by U.S. soldiers at My Lai in 1968.

I just wish the media would be straight with us about the spying : for once.