Remember, the knock out game is nothing but a myth, or something[1]: 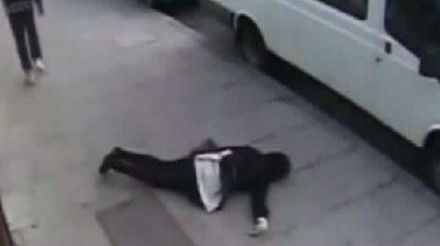 Leaders of the hareidi community in Brooklyn are demanding more police protection in the wake of another “knockout” attack against a member of the community last week. “We cannot have a situation where young members of the community will be knocked unconscious as they walk down the street here,” said a spokesperson for the community. “There was clearly a failure of: security: on the part of local police and we must: speak out: about this.”

Last Friday night, yet another attack took place against a member of the Crown: Heights community. A young yeshiva student was attacked as he was on his way home. He was attacked just a few feet from the entrance to his home.

As he approached the building, a youth followed him, and in an instant began attacking him. He struck the Jewish man several times on his head, without saying a word, the student said later. Eventually the student lost consciousness and fell down on the sidewalk.

He regained consciousness to find himself lying face down on the cold sidewalk. Amazingly, his attacker was still there. At that moment, another Jewish resident of the neighborhood passed by. The victim asked him to call the police. The perpetrator, meanwhile, ran into a building.

A police van was nearby and responded to the call. However, police refused to conduct a: search of the: building the culprit had vanished into. Police said that the victim would be unable to positively identify the culprit. Police took the victim’s complaint and handed the case off to detectives.

Where it was circle filed.

Buddy system everyone. : Also, keep your head on a swivel.

See also: : Victims of Racism Rebel Against the Microaggressions of Grammar and Punctuation