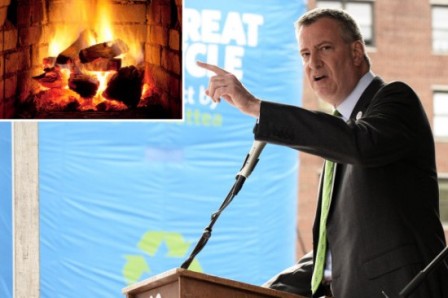 But he also assured New Yorkers that if they like their wood-burning fireplace, they can keep it. (Where have we heard that before?)

Instead of wood-burning fireplaces, de Blasio wants to allow only cleaner-burning units, such as those that use natural gas…Residents who already have wood-burning fireplaces would be allowed to keep them, but would be required to use only firewood that has 20 percent moisture or less, according to the Department of Environmental Protection.

Officials said that drier wood burns more cleanly and releases fewer toxins into the air. The Department of Health and Mental Hygiene estimates that emissions from the toxins contributed to a 12 percent boost in premature deaths annually from 2005 to 2007.

Any time someone starts throwing around scary-sounding, yet vague, words like “toxins,” your bullshit detector should go off. Which toxins? How exactly did they “contribute” to premature deaths? Did they emit more “toxins” than the private jets and luxury SUVS de Blasio undoubtedly uses to get around? By the way, I’ve noticed that politicians never propose banning either of those two modes of transportation. Environmentalism imposes far more burdens on ordinary people than on the rich, who can spare the extra cash for an organic, pesticide-free, hormone-free, eco-friendly lifestyle.