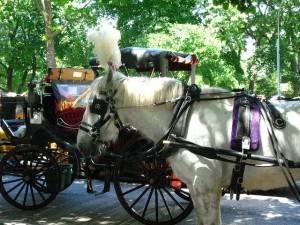 From the streets of New York to an Elmer’s glue stick. Nice work, liberals.

“We are going to get rid of the horse carriages. Period,” de Blasio said in response to a question at his press conference announcing his schools chancellor pick Monday.

The: Daily News: reported[4]: in October that if funds for the horses’ retirement are not raised, the roughly 200 animals could face slaughter.