Obama Admin Flies 400 Illegals Caught In Texas To Arizona, Released By Dropping Them Off At A Greyhound Station

The Obama version of deportation:[1] 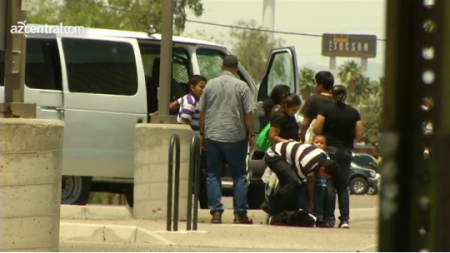 Scores of undocumented immigrants from Central America have been released at Greyhound Lines Inc. bus stations in Tucson and Phoenix over the past several days after they were flown to Arizona from south Texas, officials acknowledged.

Andy Adame, a spokesman for the Border Patrol in Tucson, confirmed that over the weekend federal officials flew about 400 migrants apprehended in the Rio Grande Valley of Texas to Tucson to be processed. He said the migrants were flown to Arizona because the Border Patrol does not have enough manpower to handle a surge in illegal immigrants in south Texas.

The release has drawn criticism from those on both sides of the immigration issue.

Border enforcement groups are concerned that the migrants will now disappear into the U.S., spurring even more to come illegally.

“This is a huge concern,” said Ira Mehlman, a spokesman for the Federation for American Immigration Reform, a Washington, D.C.-based group that advocates for more immigration and border enforcement.

I don’t think this is going to spur more to come to America.

I mean, how could it? : They’re already flooding in.

See also: : 23-Year-Old Woman Sent to Jail for Torturing Dogs and Cats to Death to Make Videos for People Who Found It Arousing