: A despondent yet vengeful Sen. Harry Reid slithered out his office today and with the help of his fellow creepy crawler Senate Democrats changed a 200 year plus old rule that severely diminishes the capacity of Republicans to mount a filibuster against Obama’s most radical judge appointees.:

Now Obama can appoint the Rev. Al Sharpton to a judge seat and GOPers are powerless to stop him.:  This is who progressives are–ruthless and nasty!

Washington Post[1] reports the partisan battles that have paralyzed Washington in recent years took a historic turn Thursday, as Senate Democrats eliminated filibusters for most presidential nominations, severely curtailing the political leverage of the Republican minority in the Senate and assuring an escalation of partisan warfare. 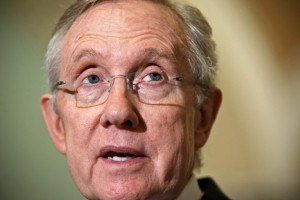 [2]Saying that “enough is enough,” President Obama welcomed the end of what he called the abuse of the Senate’s advise and consent function, which he said had turned into “a reckless and relentless tool” to grind the gears of government to a halt.

While “neither party has been blameless for these tactics,” Obama said in a statement to reporters at the White House[3], “today’s pattern of obstruction .â€‰.â€‰. just isn’t normal; it’s not what our founders envisioned.” He cited filibusters against executive branch appointments and judicial nominees on grounds that he said were based simply on opposition to “the policies that the American people voted for in the last election.”

“This isn’t obstruction on substance, on qualifications,” he said. “It’s just to gum up the works.”

The rule change means that federal judge nominees and executive-office appointments can advance to confirmation votes by a simple majority of senators, rather than the 60-vote supermajority that has long been required to end debate and proceed to an up-or-down majority vote to confirm or reject the nomination.

For every action there’s an equal and opposite reaction.:  THE PEOPLE will respond in kind this treachery!

Originally published at The Last Tradition [5]