It’s time to play another game of “imagine if this was a Republican!” Obama looked higher than a kite during this interview[1]. While this would be fertile ground for both parody and endless handwringing if it were, say, Ted Cruz or Rand Paul, no one in the media has noticed. 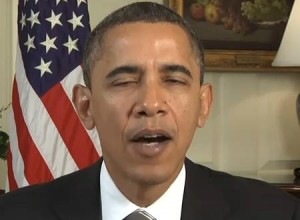 This really shows that reporters, far from being objective, have a protective attitude toward Obama.

Notably missing from those expressing concern about the president’s apparent drug induced impairment were members of the ever-opinionating press. Only one reporter that I saw on Twitter expressed concern over Obama, asking what was wrong with his eyes.

If this had been President George W. Bush, who owned up to problems with alcohol as a young married man and quit drinking, the media would have been all over him last night and would be demanding answers from the White House today.

Bush mispronounced a word, and we never heard the end of it. Obama goes on TV looking like that and we don’t even get an SNL skit?