In 2008, Obama promised to create a “Civilian national security force.” What do we have today? Over 120,000 armed federal agents in America[1]. 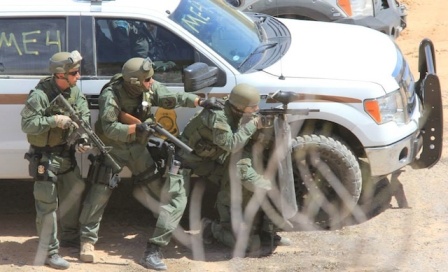 Meanwhile, Obama is hard at work trying to take civilians’ guns away.

The agencies employ about 120,000 full-time officers authorized to carry guns and make arrests, according to a June 2012 Justice Department report…Though most Americans know agents within the Drug Enforcement Agency and the Federal Bureau of Prisons carry guns, agencies such as the Library of Congress and Federal Reserve Board employing armed officers might come as a surprise.

The Environmental Protection Agency, whose armed agents in full body armor participated, acknowledged taking part in the Alaska Environmental Crimes Task Force investigation, which it said was conducted to look for possible violations of the Clean Water Act.

In other words, bureaucrats from agencies like the EPA can force civilians to obey regulations at gunpoint, instead of leaving law enforcement to, uh, law enforcement. A nation “controlled by a political police force” is the actual, textbook definition of a police state.