Obama Promises to Veto Bill Requiring Him to Follow the Law

How’s this for a display of overtly dictator-ish behavior? Obama has threatened to veto a bill that would curb abuse of presidential power. [1] 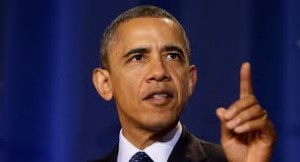 The lead sponsor of the measure, Rep. Trey Gowdy, R-S.C., said it was designed to curb Obama’s abuse of presidential authority, most notably in his frequent changes to Obamacare.

“We have pursued certain remedies afforded to Congress to address executive overreach but these efforts have been thwarted,” Gowdy said. “This bill is necessary; it will give Congress the authority to defend this branch of government as the Framers and our fellow citizens would expect.”

Obama also threatened to veto another bill by Rep. Ron DeSantis, R-Fla., which would require the administration to explain decisions not to enforce laws when those decisions are rooted in policy concerns rather than just constitutional concerns (which the Justice Department is already required to do).

In other words, Obama doesn’t want any input from the American people via their representatives in Congress–and he doesn’t owe them an explanation, either.